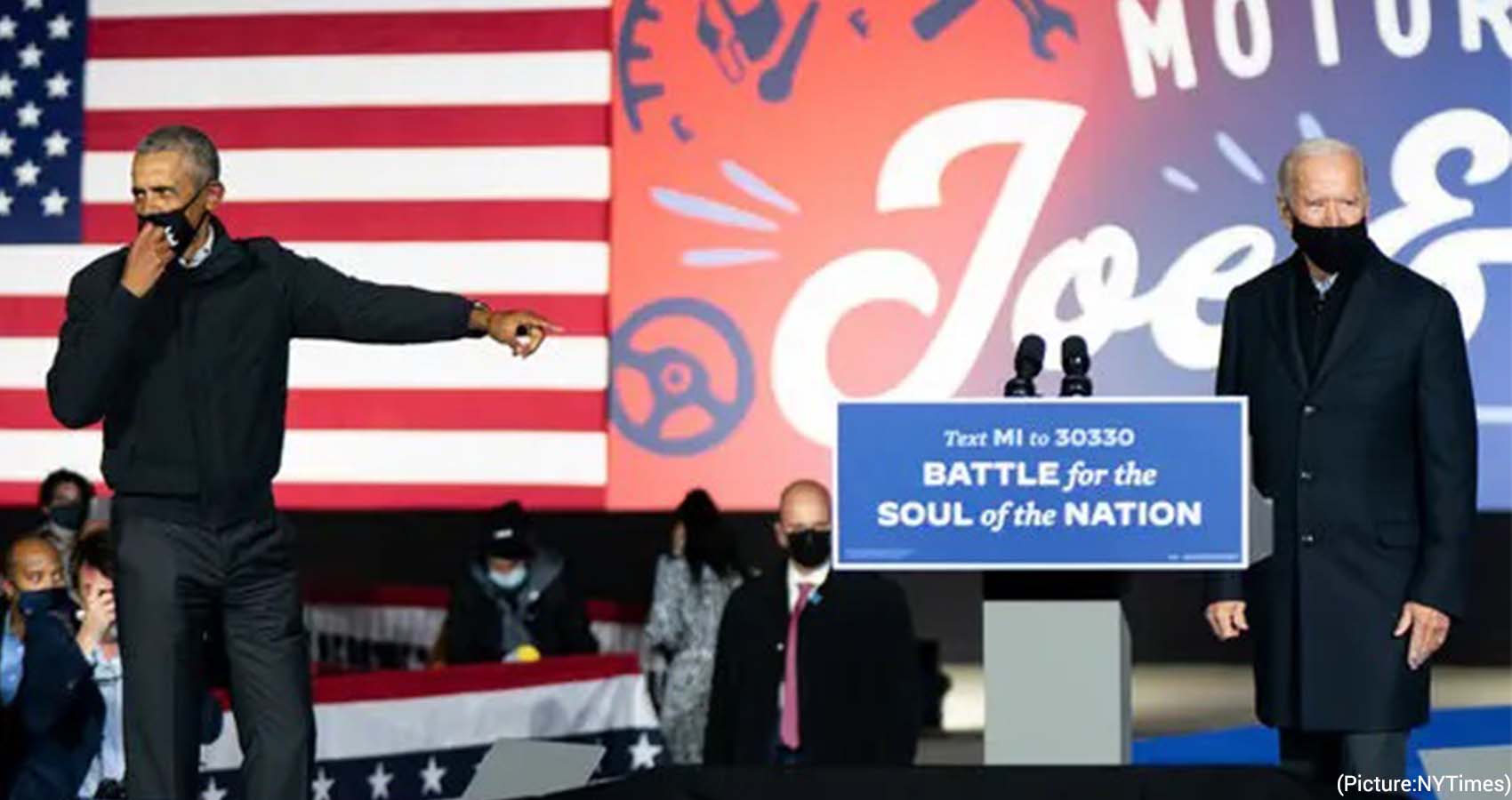 Joe Biden began his presidency with positive job ratings and broad public confidence in his ability to deal with a number of major challenges – particularly the public health impact of the coronavirus. He starts his second year with diminished job approval and majorities expressing little or no confidence in him on many of these same issues, the coronavirus included. 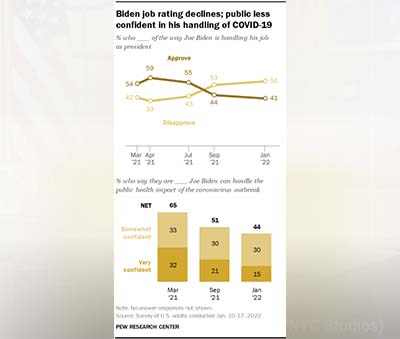 Currently, 41% of U.S. adults approve of Biden’s job performance, which is down slightly from September (44%) and substantially lower than last April (59%).

With the omicron variant continuing to spread across the United States, fewer than half of Americans (44%) now say they are very or somewhat confident in Biden to handle the coronavirus; that share is down 21 percentage points since March (65%).

A new national survey by Pew Research Center, conducted Jan. 10-17 among 5,128 adults on the nationally representative American Trends Panel, finds that Biden and his party are facing a difficult political environment with the midterm elections 10 months away:

Just 21% of the public is satisfied with the way things are going in the U.S. That is 12 points lower than last March (33%) and 15 points lower than in February 2018 (36%), near the beginning of the previous midterm year. For more, see Americans broadly negative about the state of the nation, but most see a better year ahead.

The public’s views of the nation’s economy remain quite negative; just 28% say economic conditions are excellent or good. Overwhelming majorities say that prices for food and consumer goods (89%) and gas prices (82%) are worse than they were a year ago, with more than half saying they are “a lot” worse (60% food and consumer goods, 54% gas prices). However, a 56% majority says the availability of jobs has improved compared with a year ago.

Nearly two years after the coronavirus first began spreading in the United States, majorities continue to say COVID-19 is a major threat to the economy (69%) and to the health of the U.S. population (57%). When thinking about the pandemic, Americans are split over whether the worst is still to come (50% say this) or the worst is over (49%).

Since September, Biden’s job approval has declined 3 percentage points among the public overall, but 7 points among Democrats and Democratic-leaning independents (from 75% to 68%); over the past six months his job rating among Democrats has fallen 20 points (from 88%). The falloff in this period has been less pronounced among Republicans and Republican leaners (10 points since July), who already overwhelmingly disapproved of the president’s performance.

In addition, favorable views of Congress have declined, with the change largely driven by Democrats. Overall, 28% of the public expresses a favorable opinion of Congress, compared with 36% last April. While Democrats are twice as likely as Republicans to have a favorable view of Congress (36% vs. 18%), the share of Democrats who view the Democratic-led Congress favorably has fallen 14 points since last April (from 50%); Republicans’ views are little changed (21% then, 18% now).

Nonetheless, the public continues to have a more positive image of the Democratic Party than the Republican Party, though majorities have unfavorable impressions of both. Currently, 43% view the Democratic Party favorably and 35% have a favorable view of the GOP. Ratings for both parties have slipped slightly since last year; notably, both coalitions continue to view their own parties somewhat less favorably than they did in March 2021. 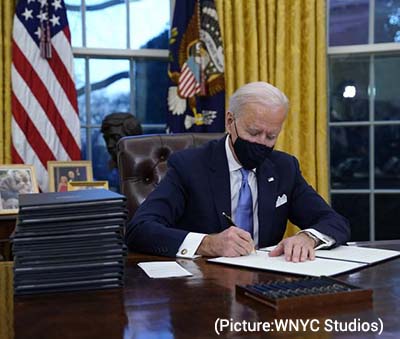 Democrats also are more widely seen as governing honestly than Republicans (45% vs. 39%), and a larger share of the public says the Democratic Party (51%) than the Republican Party (46%) respects the country’s democratic institutions. Yet majorities view both parties as “too extreme” in their positions; 57% say this describes the Democratic Party very or somewhat well, while 60% say it describes the Republican Party.

The year begins with members of both parties less willing to support their parties’ leaders making concessions to achieve results than they were a year ago. Nearly half of Democrats (48%) want Biden to “stand up” to Republicans even if it makes it harder to address key problems; 37% said this last year, shortly before his inauguration.

Republicans, who were more resistant to making concessions a year ago, have become even more so; 72% want GOP leaders to stand up to Biden, up 13 points from last year.