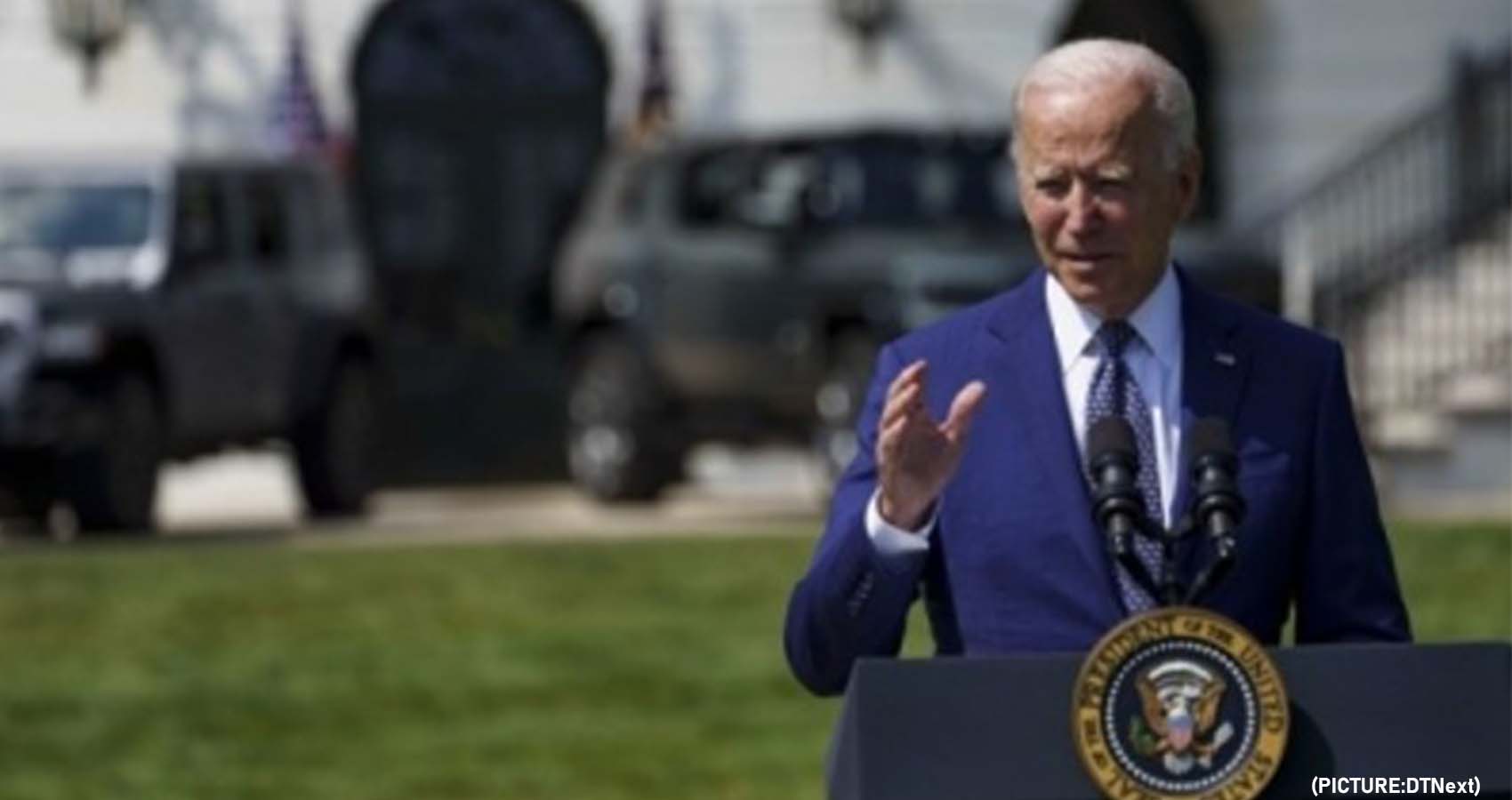 It’s been a very rough last two months for President Joe Biden, plagued by a disastrous end to the war in Afghanistan and the Delta variant of the coronavirus rampaging through the unvaccinated. Those twin developments have badly eroded Americans’ view of the President, according to new Gallup numbers released this week. Biden’s job approval now sits at just 43% while a majority — 53% — disapprove of how he has handled his duties. 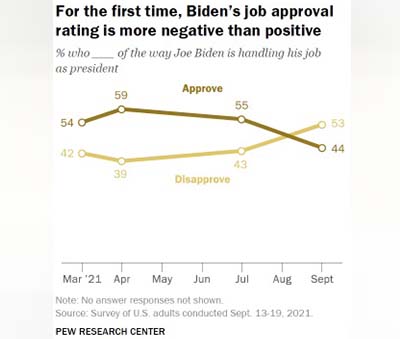 It’s been a rapid descent for Biden. As late as June, 56% approved of how he was doing while only 40% disapproved. The decline began in July (50% approve/46% disapprove) and in August roughly the same number approved (49%) as disapproved (48%). The decline in Biden’s numbers is almost entirely attributable to independents souring on him. In June, 55% of those not affiliated with either party approved of how Biden was handling the presidency. Today that number sits at just 37%. As Gallup’s Megan Brenen notes: “Two-thirds of Biden’s slide among independents since he took office has occurred in the past three months.” (Partisans have been remarkably consistent; Roughly 9 in 10 Democrats approved of Biden’s presidency while single-digit percentages of Republicans feel the same.)

Biden’s struggles of late put him in company he would prefer not to keep: Only Donald Trump — at 37% — among recent presidents had a lower approval rating at this point of their presidency. Both Barack Obama (52%) and George W. Bush (51%) had the approval of a majority of the country in September of their first year in the White House.

Biden’s polling ebb could not come at a worse time for his presidency. Right now, Congress is embroiled in a series of critical fights — most notably over a $1.2 trillion infrastructure bill and a $3.5 trillion budget bill, which, taken together, form the crux of Biden’s entire first-term agenda. There’s also consternation — and confusion — over raising the debt limit and funding the government.

All of these crises would be more manageable for Biden if he was in a stronger position with the American public. If, say, he was at 55% or even 60% approval, Biden’s ability to cajole warring moderate and liberal forces in the House would be significantly higher. All politicians are aware of the leverage I(or lack thereof) that a president has over them — and act accordingly.

The other purely political problem that Biden’s declining numbers creates is that Democrats in swing districts and states start to get very jumpy when they see the incumbent president of their party struggling in the polls. History tells us that the first midterm election for a president’s party is usually tough for his party in Congress. And that goes double when the president’s approval rating is below 50% — as Biden’s is now. What that likely leads to is individual Democratic members looking for ways to break with Biden in hopes of convincing their voters that there is some significant distance between themselves and Biden. (Side note: This attempted distancing almost never works.) All of it is bad for Biden and his party in Congress. The confluence of his faltering poll numbers with the single most critical week, legislatively speaking, of his presidency creates a vicious cycle that makes a positive outcome for Democrats less and less likely.

With his administration facing multiple challenges at home and abroad, President Joe Biden’s job approval rating has fallen sharply in the past two months. Fewer than half of U.S. adults (44%) now approve of the way Biden is handling his job as president, while 53% disapprove. This marks a reversal in Biden’s job ratings since July, when a 55% majority approved of his job performance and 43% disapproved. Since spring, public confidence in Biden has declined across several issues. In March, majorities expressed confidence in him across six of seven dimensions, including his handling of the public health impact of the coronavirus, and foreign and economic policies. Today, about half still express confidence in his handling of the coronavirus and the economy – but majorities have little or no confidence in him in four other areas.

Positive evaluations of several of Biden’s personal traits and characteristics have shown similar decreases. Compared with March, fewer adults say Biden cares about people like them, and fewer describe him as standing up for his beliefs, honest, a good role model and mentally sharp. While opinions about Biden remain sharply divided along partisan lines, the decline in his public standing has come among members of both parties. On his job rating, for example, there has been a 13 percentage point decline in the share of Democrats and Democratic-leaning independents who approve of Biden’s performance (from 88% in July to 75% today); only 9% of Republicans and GOP leaners approve, down from 17% two months ago.

The new survey by Pew Research Center, conducted Sept. 13-19 among 10,371 adults on the Center’s nationally representative American Trends Panel, finds that Biden is not the only political leader in Washington whose job ratings have fallen. Just 27% of Americans approve of GOP congressional leaders, down 5 percentage points since April. The decline in approval ratings for Democratic leaders in Congress has been even larger, from 50% to 39%.

There also are signs that the public is generally becoming more pessimistic: Just 26% say they are satisfied with the way things are going in the country, down from 33% six months ago. And while views of current economic conditions remain lackluster – 26% rate them as excellent or good – expectations for the economy over the next year have become more negative than they were in the spring.

Currently, 37% of Americans say economic conditions will be worse a year from now, while 29% say things will be better; 34% expect little change. In March, more said economic conditions would improve (44%) than get worse (31%) over the next year, while 24% said conditions would be about the same as they are now. As has been the case since he took office, Biden draws more public confidence for his handling of the public health impact of the coronavirus than other issues.

About half (51%) are very or somewhat confident in his handling of the coronavirus outbreak, but that is down from 65% in March. The shares expressing confidence in Biden’s handling of economic policy, foreign policy and immigration policy also have declined.  Biden continues to draw less confidence for unifying the country than on dealing with specific issues; only about a third (34%) are confident he can bring the country closer together, a 14 percentage point decline since March.

Assessments of Biden’s personal traits also have become less positive. While majorities say he stands up for what he believes in (60%) and cares about the needs of ordinary people (54%), larger shares described Biden in these terms six months ago (66% and 62%, respectively). Biden receives his least positive assessments for being mentally sharp. Currently, 43% say this describes Biden very or fairly well, an 11-point decline since March.

Other important findings from the survey:

Majority favors admitting Afghan refugees into the U.S. A 56% majority favors admitting thousands of Afghan refugees into the U.S. while 42% are opposed. There are sizable partisan differences in these attitudes: More than twice as many Democrats (75%) as Republicans (35%) favor admitting refugees who fled Afghanistan. The Biden administration continues to receive negative ratings for its handling of the situation in Afghanistan. Only about a quarter of adults (24%) say the administration has done an excellent or good job in handling the situation with the country; 26% say it has done only fair, while nearly half (48%) rate its performance as poor.

About half of adults (51%) say they favor the bill passed by the Senate last month that would provide $1.2 trillion in funding over the next 10 years for infrastructure improvements, including roads, bridges and internet upgrades. Just 20% oppose the bill, while 29% say they are not sure.

A comparable share (49%) favors a proposed $3.5 trillion, 10-year package that includes funding for universal pre-K education, expanding Medicare, reducing carbon emissions and other projects. A quarter oppose the spending package, while a quarter are unsure.

Rising prices a leading economic concern. A majority of adults (63%) say they are very concerned about rising prices for food and consumer goods. That is larger than the shares citing other economic issues – employers being unable to hire workers (42% very concerned), people facing eviction or foreclosure (35%) or people who want to work being unable to find jobs (29%). Republicans are more likely than Democrats to cite rising prices and a shortage of workers as top concerns; Democrats are more likely to be very concerned over evictions and foreclosures and people who want to work struggling to find jobs.