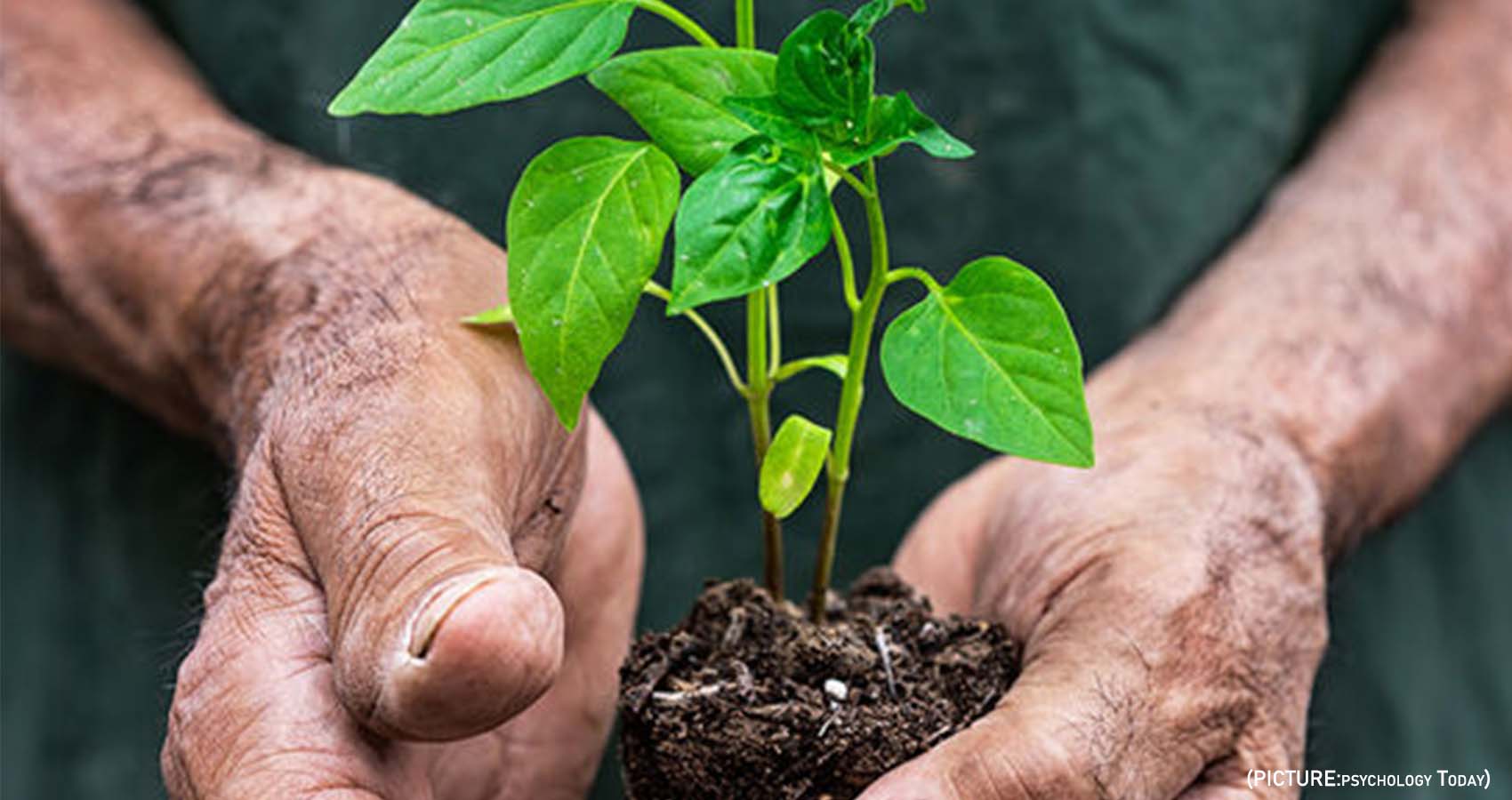 What do people value in life? How much of what gives people satisfaction in their lives is fundamental and shared across cultures, and how much is unique to a given society? To understand these and other issues, Pew Research Center posed an open-ended question about the meaning of life to nearly 19,000 adults across 17 advanced economies.

From analyzing people’s answers, it is clear that one source of meaning is predominant: family. In 14 of the 17 advanced economies surveyed, more mention their family as a source of meaning in their lives than any other factor. Highlighting their relationships with parents, siblings, children and grandchildren, people frequently mention quality time spent with their kinfolk, the pride they get from the accomplishments of their relatives and even the desire to live a life that leaves an improved world for their offspring. In Australia, New Zealand, Greece and the United States, around half or more say their family is something that makes their lives fulfilling. 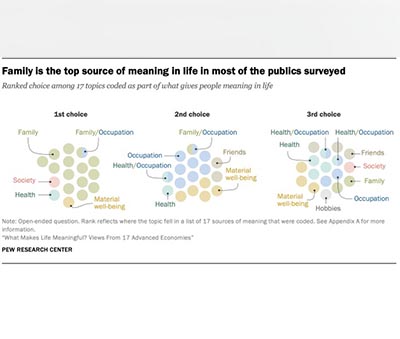 “The most important thing for me is work. I think it is very important to build my career, to build my life, so that I’m doing better and better. And the way to do that is to take a lot of personal responsibility and work hard.” –Man, 25, Netherlands.

Publics are also largely united in the relative emphasis placed on careers and occupations. Jobs are one of the top three sources of meaning for people in most places surveyed. Still, the emphasis placed on them can vary widely, from a high of 43% in Italy to a low of 6% in South Korea.

And although in Italy as many cite their occupation as cite their family as a source of meaning, in places like the U.S., only around a third as many cite their careers. While some specifically describe their careers and what is meaningful about them – e.g., a cybersecurity worker who enjoys seeing his contributions in practice or a teacher who enjoys helping to inform children about history – others more generically mention enjoying their work or their colleagues or feeling intellectually challenged. 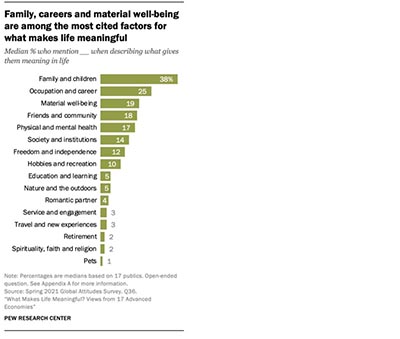 Many also highlight the importance of having one’s basic financial needs met – or even having some level of luxury – in order to lead a meaningful life. In nine of the 17 publics surveyed, material well-being is one of the top three factors people cited and, in most places, around one-in-five or more mention it. In South Korea, it even emerges as the top source of meaning. Still, the lifestyle elements respondents cite run the gamut from “food on the table” and “a roof over my head” to “a decent income to support my family” and “no debt” to “enough money” to enjoy riding motorcycles or other activities like travel.

“Being comfortable and stable with basic needs (food, shelter, health care and public education for my child) and a little extra (maybe going out to dinner or a vacation).” –Woman, 51, U.S.

Health, too, is relatively top of mind, coming up as one of the top three sources of meaning for people in around a third of the places surveyed.

Still, the relative emphasis on health can vary widely, from 48% who mention it in Spain – making it the top source of meaning for Spaniards – to only 6% who say the same in Taiwan. For some, specific health problems cause them to value their health – such as one American woman who noted, “God gave me life, He pulled me through cancer. Life is precious and we only have one chance at it.”

Others more generally note health as a prerequisite for other sources of meaning, emphasizing “being healthy” or “still breathing” as part of a list of things they value. Exercise and a healthy lifestyle are also touted as sources of meaning.

Notably, for most, this emphasis on health is not tied directly to the COVID-19 pandemic. Although there is a widespread sense in most publics surveyed that the global pandemic has changed people’s lives, in most places, people who mention health as something that gives them meaning are no more likely to mention COVID-19 than those who do not prioritize health. Some people who mention both do so because they have health problems that have been compounded by the disease, causing additional difficulty.

One American described her situation in the following way: “Currently, being self-quarantined due to health issues and to keep away from COVID, God is what keeps me going,” while another described their predicament as “years of personal work to overcome anxiety and depression [that] took a hit with social distancing.”

Still, others who mention both health and COVID-19 in their responses are largely appreciative of their health because of the global pandemic. One American woman summarized her experience as: “I had COVID and it was the scariest thing and it really changed my outlook on life.” A Dutch man also emphasized the importance of healthy living even in a pandemic context: “What I find important for a fulfilling life are things like: to do sports, meaning active exercise 2 to 3 times a week; to eat a varied diet … now in this pandemic, you still have to make sure that you get enough exercise and try to bring structure into your life by making day or week schedules.” 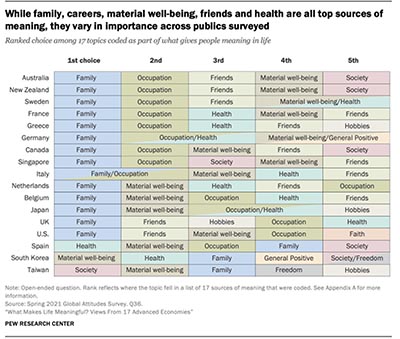 In fact, how a topic like COVID-19 comes up – or doesn’t – highlights where the commonalities end and the differences between these 17 advanced economies emerge. Take Taiwan as an example. In Taiwan, society – or the institutions and attributes of where people live – is the top source of meaning, above family, occupation and material well-being.

Two women in Taiwan emphasize ease of living on the island: “Food, clothing, housing, and transportation are all convenient. Life is safe and tranquil,” and “There are many convenient stores in Taiwan … The public health insurance system is good; medical service is convenient.” Others note their satisfaction with Taiwan’s political system. One woman claimed she is “fortunate to live in Taiwan, especially in the aspect of public health, democracy, and the rule of law and human rights, because it is very free.”

A young man simply noted, “Living in Taiwan is very free, freer than China and Hong Kong.” Some specifically mentioned their government’s response to the COVID-19 pandemic, like a woman who listed the island’s “stable economy, well-controlled new COVID-19 pandemic, [and] easy access to medical care” as meaningful. Taiwan is one of the few societies – the others are also largely in the Asia-Pacific region – where references to COVID-19 do not tend to coincide with negativity; instead, most praise how well their government has handled things.

The topic of faith, religion and spirituality is also one where some societies notably differ. Outside of the U.S., religion is never one of the top 10 sources of meaning cited – and no more than 5% of any non-American public mention it. In the U.S., however, 15% mention religion or God as a source of meaning, making it the fifth most mentioned topic. For some, the emphasis on religion is about their personal relationship with Jesus: “I follow Jesus so my faith and hope is based on how he plays a role in my life.

I don’t rely on any human to benefit my life.” Others note the benefits that come from being part of organized religion, such as camaraderie in a tough time: “My husband just died, so life is not very fulfilling right now. The support of family and friends, church, and his coworkers have helped me find meaning, as well as thinking about the good things we shared.” Evangelical Protestants in the U.S. are much more likely than mainline Protestants to mention faith as a source of meaning – 34% vs. 13%, respectively. Across all U.S. religious groups, those who attend religious services more often are much more likely to cite their religion in their answer than those who are less frequent attendees.

“I find [living] within [New Zealand] satisfying. We live in a country which has natural beauty and has a great deal of respect for nature which in turn helps us get a better connection to the country. I like going outside, going for a run every day, and seeing blue skies, forests and the wonderful people and it has a positive impact on my mental health, and especially compared to other countries I’ve been to.” –Man, 18, New Zealand

The United Kingdom, Australia, France, New Zealand and Sweden also stand apart for the relative emphasis they place on nature compared to many other places surveyed. In each of these countries, nature is one of the top eight sources of meaning. In the UK, too, hobbies and activities are revered by many: Around one-in-five mention their hobbies as something that gives them satisfaction in life, ranking only behind family and friends. (To explore more about how each society is similar – or different – and to read about where people get meaning in their own words, please see “What people around the world say about the meaning of life.”)

When discussing what makes life meaningful and fulfilling, a median of 10% across the 17 publics surveyed also mention challenges or difficulties that have interfered with their search for happiness. Once again, this varies substantially across the publics surveyed, with around one-in-five mentioning hardships in Italy, but only 5% or fewer saying the same in New Zealand and the UK.

Why this report focuses on topic rankings in addition to percentages

There is some variation in whether and how people respond to the open-ended question. In each public surveyed, some respondents said that they did not understand the question, did not know how to answer or did not want to answer. The share of adults that did so ranged from 23% in the U.S. to 1% in Spain.

In some publics, people also tended to mention fewer things that make life meaningful in their response than did people surveyed elsewhere. For example, across the 17 publics surveyed, a median of 34% responded to the question about what gives them meaning in life by mentioning only one of the topics researchers coded (e.g., family). The shares in South Korea and Japan are much higher, with at least half only bringing up one source of meaning when providing a response.

These differences help explain why the share giving a particular answer in certain publics may appear much lower than others, even if the topic is the top mentioned source of meaning for that given public. To give a specific example, 19% of South Koreans mention material well-being while 42% say the same in Spain, but the topic is ranked first in South Korea and second in Spain. Given this, researchers have chosen to highlight not only the share of the public who mention a given topic but also its relative ranking among the topics coded, both in the text and in graphics.

These are among the findings of a new analysis of an open-ended question about meaning in life, which was part of a Pew Research Center survey conducted Feb. 1 to May 26, 2021, among 18,850 adults in 17 advanced economies.

In addition to similarities and differences between the publics surveyed, the analysis also reveals broader patterns in where people find meaning based on their age, gender, income and political ideology, among other factors. Some of these additional key findings include: 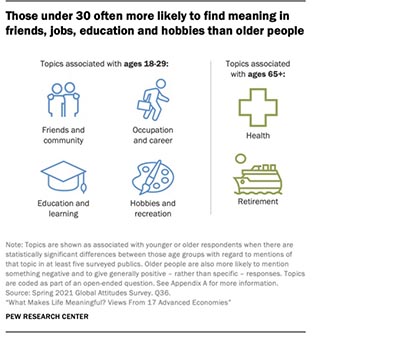 In the U.S., partisanship also sometimes plays a role. For example, Republicans and Republican-leaning independents are about twice as likely than their Democratic counterparts to bring up freedom and independence. Americans today – and especially Republicans – have also become more likely to mention freedom and independence as a source of meaning in life since 2017. For more on this and other changes over time, see “Where Americans find meaning in life has changed over the past four years.”