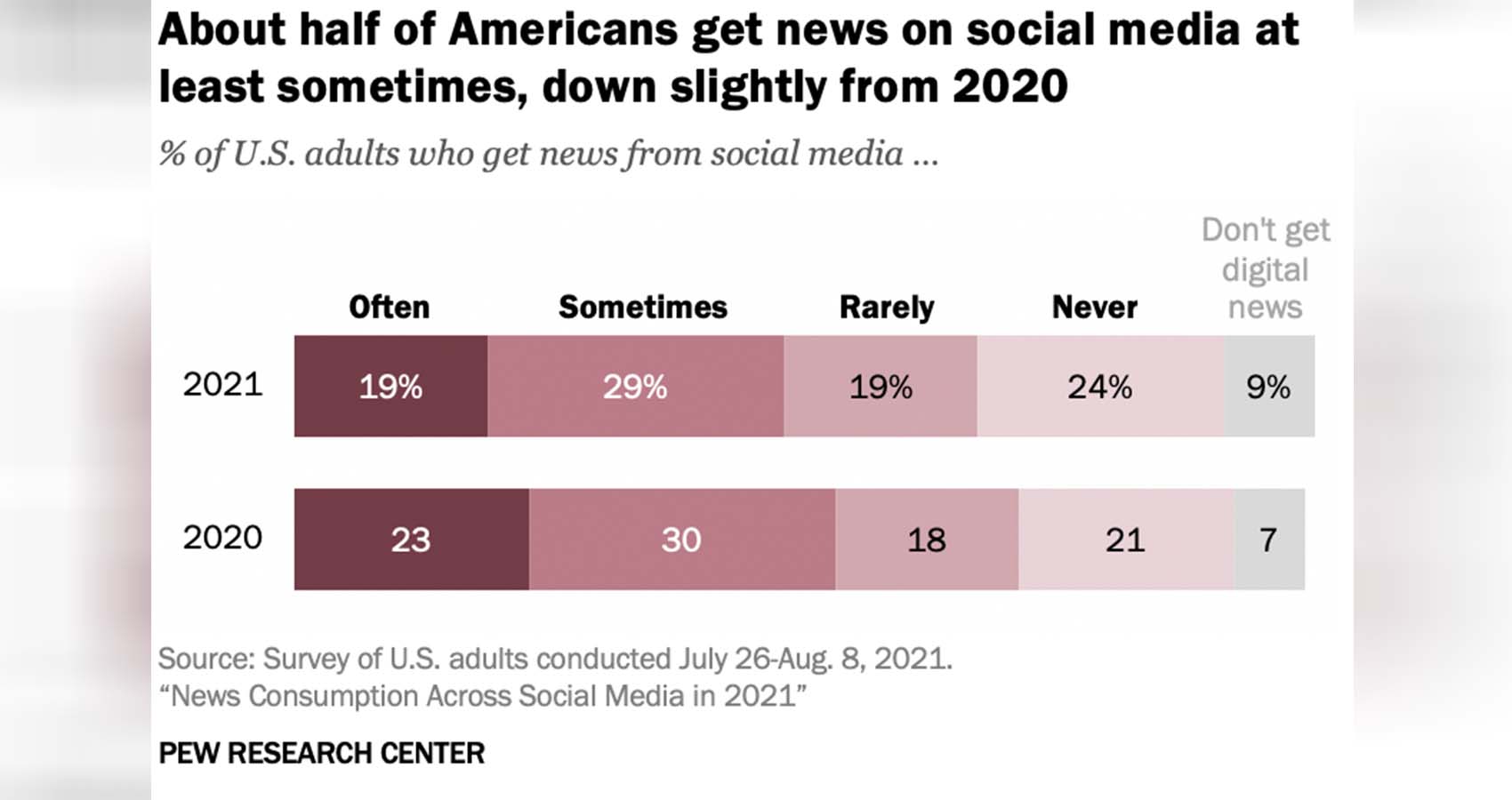 As social media and technology companies face criticism for not doing enough to stem the flow of misleading information on their platforms, a sizable portion of Americans continue to turn to these sites for news. A little under half (48%) of U.S. adults say they get news from social media “often” or “sometimes,” a 5 percentage point decline compared with 2020, according to a Pew Research Center survey conducted July 26-Aug. 8, 2021.1

When it comes to where Americans regularly get news on social media, Facebook outpaces all other social media sites.

Other social media sites are less likely to be regular news sources. Fewer than one-in-ten Americans say they regularly get news from Reddit (7%), TikTok (6%), LinkedIn (4%), Snapchat (4%), WhatsApp (3%) and Twitch (1%).

The percentage of Americans who get news regularly from these sites has remained largely unchanged since 2020, though the share who regularly get news on Facebook has declined slightly (36% in 2020 vs. 31% in 2021).

When looking at the proportion of each social media site’s users who regularly get news there, some sites stand out as being more “newsy” even if their total audience is relatively small. Twitter, for example, is used by 23% of U.S. adults, but more than half of those users (55%) get news on the site regularly. On the other hand, YouTube, though widely used, sees a smaller portion of its users turning to the site for news regularly (30%). 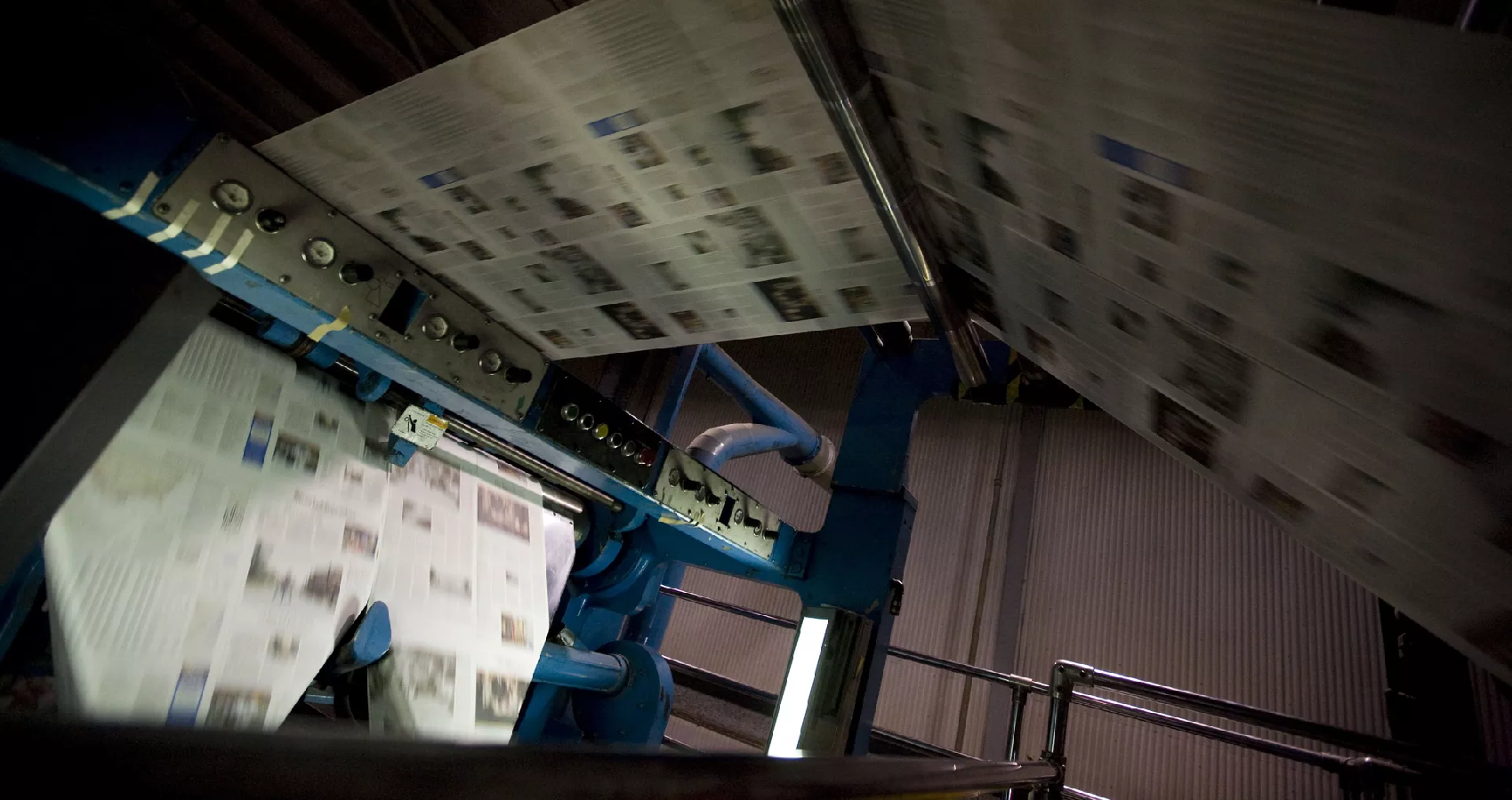 Staff layoffs continued to pummel the beleaguered U.S. newspaper industry in 2020. A third of papers with an average Sunday circulation of 50,000 or more experienced layoffs last year, a period complicated by the impact of the coronavirus pandemic, according to a new Pew Research Center analysis which examined news articles that cited staff layoffs at these outlets.

These 2020 layoffs exceed the roughly one-quarter of papers in the same circulation range that experienced layoffs in 2019 (many were the same papers) as employment within the newspaper industry continued to fall precipitously in recent years.

Large-market newspapers – those with a Sunday circulation of 250,000 or more – were the most likely to suffer layoffs in 2020, with more than half of them experiencing staff cuts. That is unlike 2019, when cuts were roughly similar across the different tiers of circulation groups studied. Meanwhile, digital-native news outlets saw a slight uptick in layoffs in 2020 compared with 2019.

During the coronavirus pandemic, many small and medium-sized newspaper companies were able to apply for federal aid through the CARES Act, a federal coronavirus aid package designed to help small businesses pay employees and other expenses. However, due to rules surrounding this loan program, many local newspapers owned by larger companies such as Gannett or McClatchy were not eligible to apply.

This analysis examines layoffs at large newspapers and digital-native news outlets during the 2017-2020 calendar years, but does not include other cost-cutting measures. During early days of the COVID-19 outbreak, many news media companies either delayed or avoided layoffs by first instituting cost-cutting measures such as furloughs or pay cuts.

Nearly half of newspapers (46%) that experienced layoffs in 2020 also had layoffs in 2019, indicating that many of the same papers have been forced to implement layoffs multiple times in recent years.These findings come amid reports that many small newspapers have closed due to the coronavirus pandemic and many more have sought federal aid in order to stay afloat.

It is worth noting that most of the layoffs that occurred at digital-native news outlets in 2020 occurred in the latter half of the year, after the COVID-19 pandemic gripped the U.S. During the early part of the outbreak, many digital news outlets postponed or avoided layoffs entirely by first implementing pay cuts and furloughs.