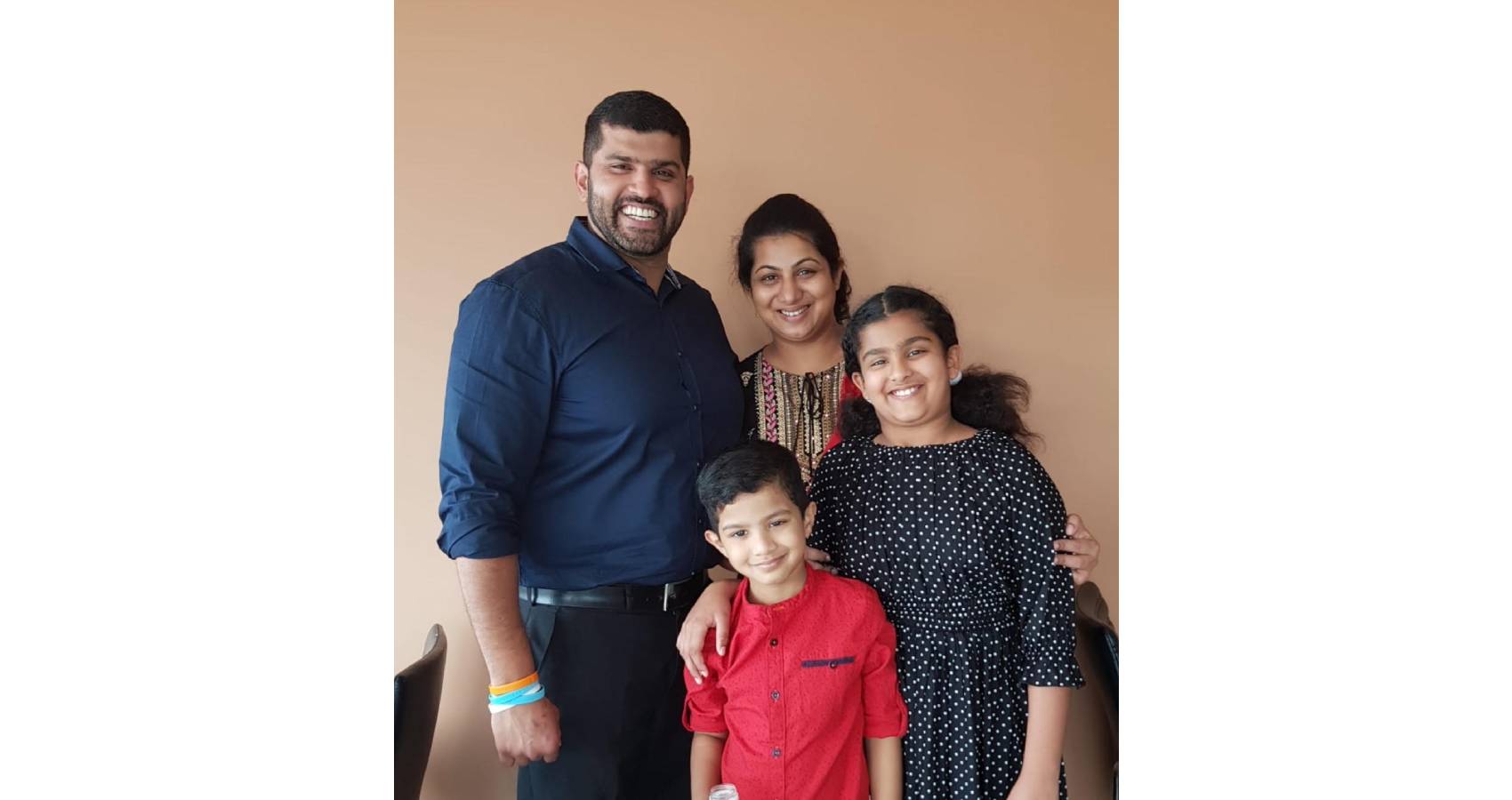 A Malayalee family feeds the poor in Australia and India by collecting bottles from the streets and beaches! Recently, Australian and Malayalam newspapers have been reporting on a Malayalee who has been involved in charity work in various places, starting with a slum school in Mumbai, Uganda, and Indonesia.

“A helping hand to those suffering from Covid in various parts of the state under the leadership of a young foreign Malayalee, George Thomas (34), son of KozhencherryKeezhukaraKoikalethuAniyan, who works in Australia, distributed food kits as part of the Restore Kerala project. In the first phase, 400 food kits worth Rs.1000 each. The next step is to prepare for the distribution of the drugs. George is the Director and CEO of the Mustard Seed Family Project, a social service organization based in Australia.” that is what I read off-late about this strange family. Joshi Emmanuel, my friend, and a social activist in Australia, has referred to Georgie, a Malayalee trying to improve the lives of the poor by collecting and selling bottles. Curious to know more, his phone number was sought from Joshi. 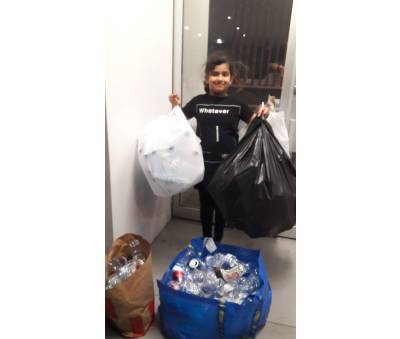 George Thomas, a senior manager at a hotel in Australia earlier, is currently the driver of the Australian luxurious Ghan Train,  that runs all the way from Darwin to Adelaide for the last two years. I wished to hear the details from the horse’s mouth itself. Australian time is sixteen hours ahead of American Las Vegas time. I tried on the phone several times. When we finally got online, we were delighted and talked in detail for a long time. When the relevant parts of his dedicated charitable efforts were reflected in his thoughts, proudly thought of presenting this particular youngster and family among the few young people who had humanity in mind.

“I can not describe how the hardships in the lives of my companions entered my heart. But the cries of hunger at home and in Australia, where I live, kept coming back to haunt me. It is not right to say only to me; it was a pain for my whole family,” said George. “I studied hotel management. And was the manager of a restaurant at Adelaide Airport with a five-star status and often enjoyed the top class food too. Life meticulously looked good. But when I see people around me begging for food, there is a sigh somewhere inside. Not only me but my wife Minu had the same experience as me”.

“But how can that help? Where can I find the money for it? (While I was saying this, Minu was helping people with the money she got from her job and also sponsoring the teaching of children in the country.) The demand was exceedingly curving up. But we could not go on without finding extra money”. “So one of the ideas was to pick up bottles from the streets and beaches and give it to Recycling for money. If we work a little more challenging, we can help some families without reaching out to others. Then we decided to look at the same path without any hesitation.”Besides, the government pays 10 cents (five rupees) per bottle. This is an earnest project implemented by the South Australian government,” says George, referring to the idea of ​​the Ten Cents 4 A Family.

His family and I started collecting bottles on the third of January 2019 roaming the streets and beaches to pick up leftovers. The money raised was used to buy food for Salvos’ inmates, a leading Australian charity. George and his family bought canned food and juices that had not been spoiled for some time. George is proud to say that they have also started delivering food to a village in West Bengal. “As the project entered its second month, our expectations have doubled. More and more bottles could be collected. So we wanted to do things a little more extensively. That same month in Australia, we could pay all the hospital bills of a child who was diagnosed with blood cancer. We were also able to distribute tin food that month,” George continues.

Before coming to Australia, George worked as a hotel manager in Goa, Dubai, and London and hailed from Kozhencherry in the Pathanamthitta district of Kerala. Minu Idukki is a laundry helper in Australia. Although George and his family started collecting on the bottles for charity, one of their friends explained its other social benefits. “What George Thomas is doing is not just a good thing. It’s a fight against plastics that harm the earth.”  That’s when I realized another aspect of its common good. I was excited to hear from someone else that I’m protecting the earth,” says George, who started doing charity work knowing that it was also against plastic waste.

To the slums of Mumbai

At first, he did not operate as a registered entity. The money raised from the sale of the bottle was set aside for the activities of any organization. But as people became aware of the need for the event, we were forced to undertake only one mission each month, ‘said George, registering as a charitable trust.  “Since 2019, we have been thinking about expanding the activities of ‘Ten Cent for a Family’ to a slum in Mumbai. At the end of the deliberations, I sought the help of a friend who was there. I went to Mumbai with my father,” said George, adding that what he saw in Mumbai was heartbreaking. 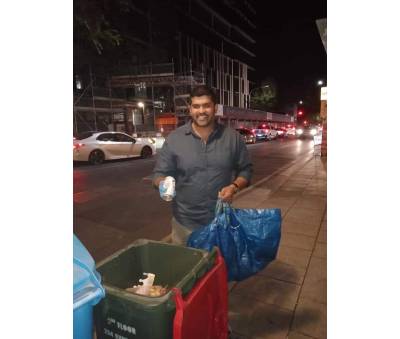 “I planned to start a school there. But how do those who have no food go to school? In addition, the children work and bring home around Rs. 200 per day. We have to make sure that we get that amount when we send our children to school. Then they said let’s leave it at school. We were willing to accept their terms.

“I rented a flat in that slum. A school was started in it. The school aims to provide basic education to children between the ages of 6 and 14 years. The primary purpose of the school was to teach the children the alphabet, arithmetic, and Hindi,” explains George.

The children who came to school started giving lunch every day. Forty children are studying in this school. .Activities in Mumbai are not limited to schools. For example, sewing classes were started during the holidays to empower slum girls and mothers. He says a lot of women and girls come there to learn sewing.George’s activities in India are not confined to Mumbai Blankets were distributed in Tukalpur, UP. Then, some charitable deeds as possible in Punjab as well. In the meantime, Kerala has not been forgotten.

When the “10 Cent 4A family” started, my goal was not just Australia. The goal was to take care of the upliftment of my country that had brought me up. Australia feeds me. My country is the reason for my progress”Georgie continues. Georgie’s 10 Cent 4A Family collaborates with the Childhood Cancer Association, the Red Cross Army and the Salvation Army as part of Mission Australia. Georgie and her family are actively involved in Mission Australia, which aims to provide housing for the homeless poor Australian citizens, provide security for girls who are victims of domestic violence, help liberate those addicted to alcohol and drugs, and provide job training for the unemployed.

George and his family have expanded their efforts to promote the social upliftment of the African nation of Uganda.

Another project “4U Café” is just a pay it forward cafe, with potential upfront payments for the next person or homeless people, and free meals for those in need. The cafe, which distributes like this, is thriving. Paid 4U Cafe, I will run for a week , and next week my wife will run the cafe with the volunteers”.Paid 4U Cafe is where distressed families and the homeless can receive coffee training, providing them with accredited training and job training experience to help them return to a normal lifestyle.

George and his family are now in the process of distributing medical kits to many poor families in Kerala in the next phase, as we have supported over 400 families with monthly food kits and other essentials under the Restore Kerala project. George was also in a good hurry due to the hot summer in Australia. So George is busy picking up bottles on the beaches and roads after the hotel is busy. During the summer, when the water level rises, the number of bottles in public places also increases that creates more resources”

The long conversation between Georgie and me ended at 10:30 pm Australian time. At that moment, he noticed that some bottles were lying on the roadside. He cut himself off, saying, “There’s no room in the car, still  I have to pack it 8in the car.” George exemplifies that if at least a little bit of humanity and goodness remains in the mind, we can prepare the poor and the deserving poor for a better life and steps to survival.His witnessing life marks the culmination of a long and arduous journey. Irrespective of how others view it, in a blaze of glory or a torrent of tears – the journey itself is a tremendous story of loving kindness for the struggling human beings around us.