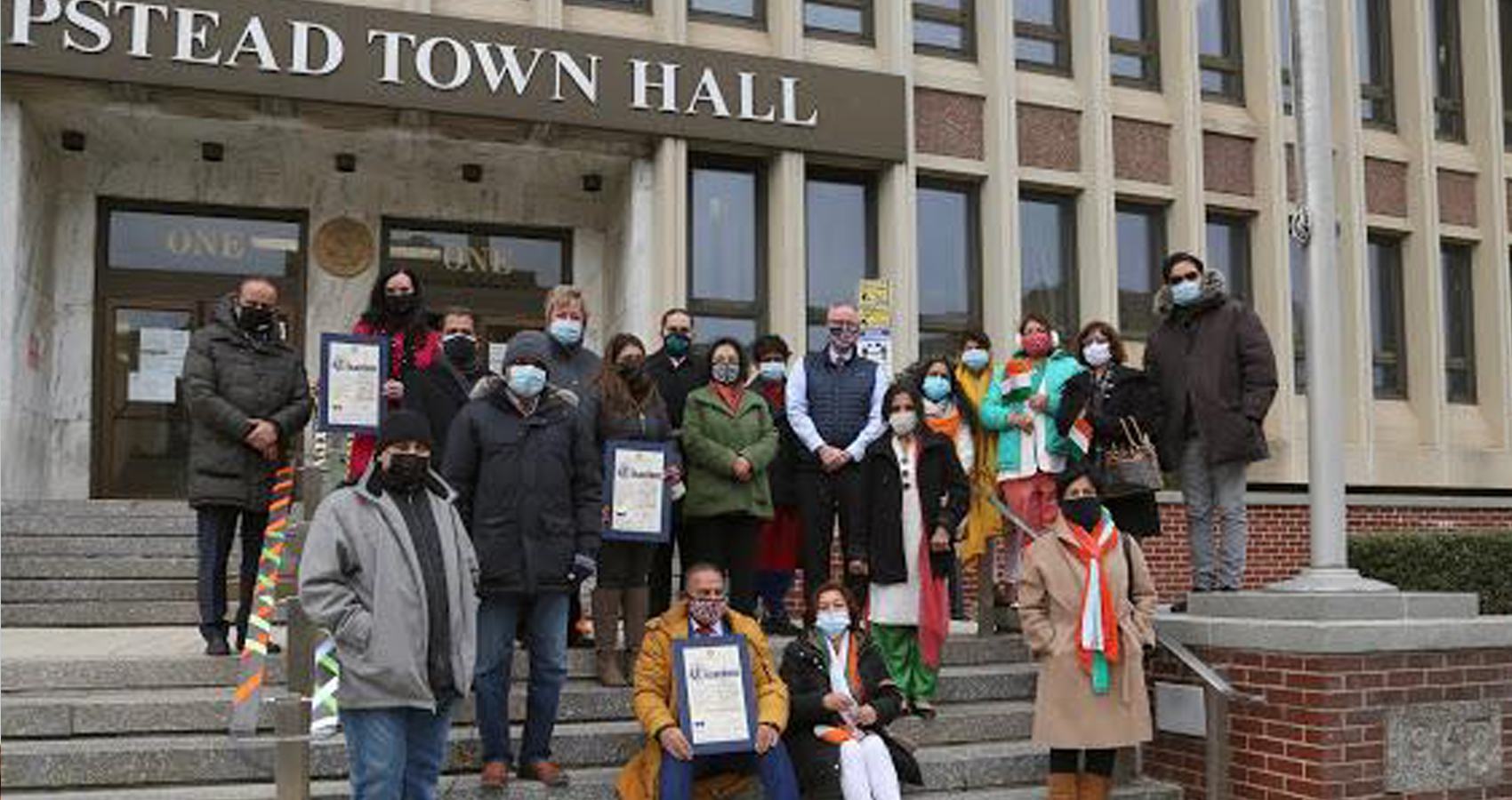 Hempstead Town Supervisor Don Clavin was joined by members of the Town Board and dignitaries from the Indian American Forum for a ceremonial hoisting of the National Flag of India to mark the 72nd India Republic Day.  The small socially distanced ceremony held outside of Hempstead Town Hall was an important show of solidarity between the world’s most populous democracy as it observed its historical day of transition to a republic, and America’s largest township. What’s more, the event was streamed live on the Town of Hempstead Facebook Page and featured a special message from the Consulate General of India, New York, Mr. Randhir Jaiswal.

Supervisor Don Clavin and the Town Board recognized the holiday as an important celebration of freedom in the world’s most populous democracy, and thanked the Indian-American community for their contributions to America’s largest township.

“The Town of Hempstead is the proud home of a great number of Indian-American families who continue to add to the incredible diversity found in the economic, civic, and cultural life of America’s largest township,” said Supervisor Don Clavin.  “Our community is better for their contributions, and I am glad to celebrate this important day with my Indian-American neighbors.”

The histories of both the United States and the Republic of India have been interwoven through the decades since the original Republic Day whereupon the two nation’s emerged as intrinsic partners on the world stage.  The deep ties produced through this transoceanic partnership extend to the individual level as well, with the United States being home to a large and fast growing Indian American community.

While the COVID-19 pandemic has forced celebrants to reimagine traditional Republic Day festivities both in the Town of Hempstead and elsewhere, Supervisor Clavin and the Town Board felt it necessary to observe the holiday which honors the adoption of the Constitution of India on January 26, 1950 and the transition of the nation to a republic.

The first honoree serves as Chief Legal Officer for the Nassau Health Care Corporation. Megan C. Ryan oversees all legal, privacy and ethics functions for the various hospitals included in the corporation. Playing a vital role in keeping these hospitals running efficiently during the COVID-19 pandemic, Ms. Ryan has done such a spectacular job that her efforts were recognized by the New York Law Journal and Law.com. In addition to her work with Nassau Health, Ms. Ryan is currently serving her second term as president of the North Merrick Board of Education.

The second honoree is no stranger to anyone from Freeport. Chief Raymond Maguire has worn many hats in the Freeport Fire Department throughout his decades of service. He currently wears two, serving as both Executive Director and Secretary of the Freeport Fire Department. Additionally, Chief Maguire has served as President of the local chamber of commerce for several years and is currently a Vice-Chairman for the Toys for Tots Foundation.

The third honoree is the owner of local Indian eatery Rajbhog Café since 2001. Sheetal Talati was born and raised in Mumbai, India, and is the chief proprietor for her restaurant. In fact, Rajbhog Café is one of the only businesses in the Long Island Indian Business Fraternity that is solely women-owned and operated. Her restaurant serves as a common meeting place for seniors, peers and community leaders and is a integral part to the neighborhood.

Following the livestreamed ceremony, the Hempstead Town Facebook page posted a compilation of traditional and modern dance performances by local dance groups on Long Island. Featuring various dances by choreographer and performer Jyotika Patel, a Temple Navagraha Dance by the Sarvamangala Shri Saneeswara Temple, and performances from Arya International, be sure to check out the post on the Town of Hempstead Facebook page!

“This is a great day around the world as communities celebrate India Republic Day and the historical significance of the holiday,” said Senior Councilwoman Dorothy Goosby. “I am proud to celebrate this special day with neighbors from across the township as well wishers around the world recognize the adoption of the Constitution of India,” said Councilman Bruce Blakeman.

“The adoption of the Constitution of India was an incredibly important moment in world history, which is why I am elated to join in the reimagined festivities taking place this year in honor of India Republic Day,” said Councilman Anthony D’Esposito.

“Members of the Indian-American community have such a profoundly positive impact on the Town of Hempstead,” said Councilman Dennis Dunne, Sr.  “It is truly a pleasure to join together with representatives from that community in celebration of the monumental achievement the founding of the Republic of India was and still is to this day.”

“The founding of the Republic of India through the adoption of the Constitution of India is a historical event of great significance I am proud to acknowledge today,” said Councilman Thomas Muscarella.

“I am proud of the accomplishments of the great Indian-American community who call Hempstead Town home and it is my pleasure to join them in celebrating India Republic Day,” said Councilman Christopher Carini.

“It is my sincere wish that while we must celebrate differently this year due to the pandemic,  that the pride felt by those instrumental in founding the Republic of India be recognized and celebrated widely on this special day,” said Supervisor Don Clavin.  “May our friends both residing in India and throughout the diaspora be encouraged by what we honor on Republic Day.”