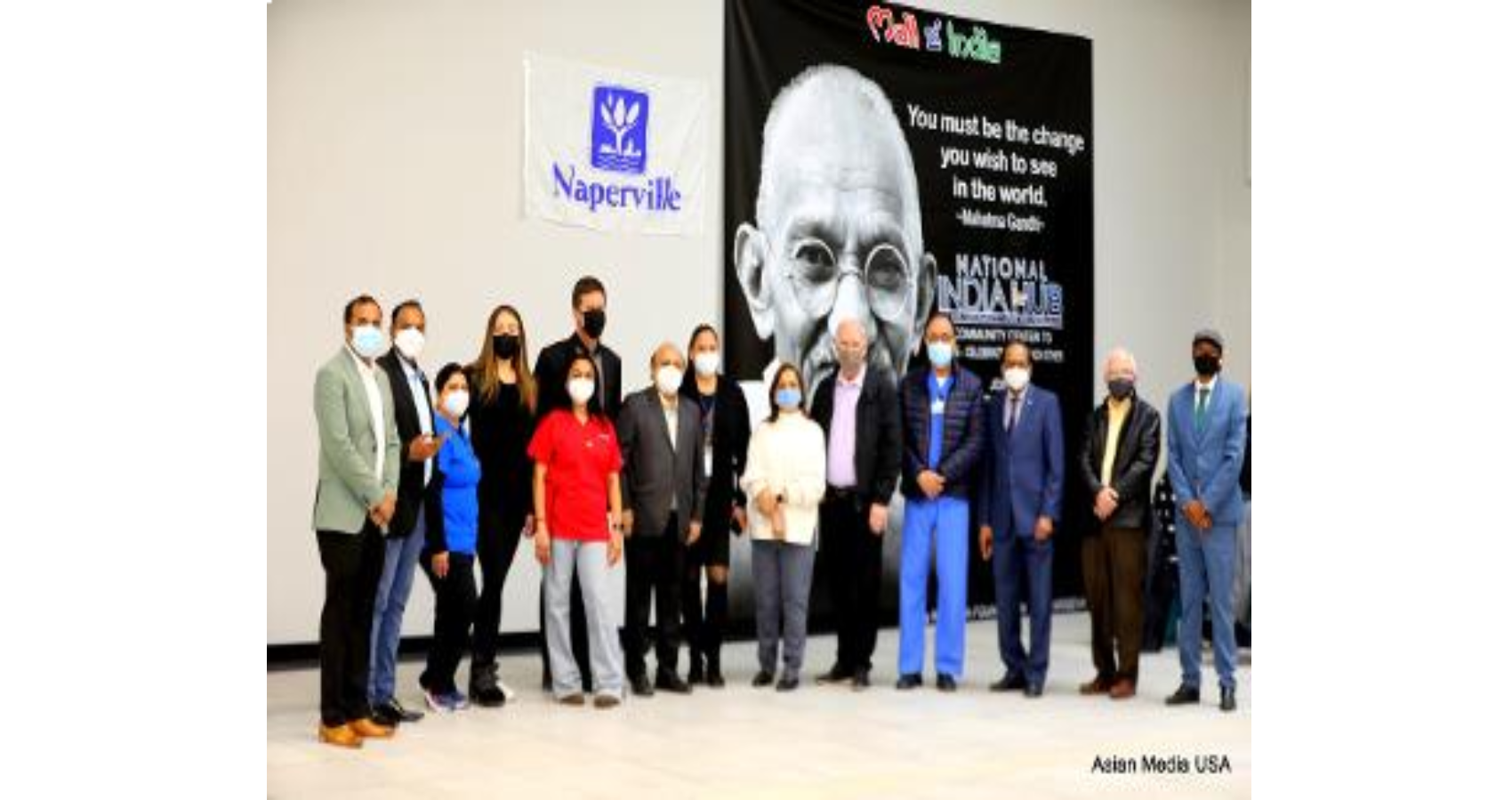 Chicago IL: The partnership with the City of Naperville and The National India Hub, organized COVID-19 Vaccination camp at Mall of India on March 16, 2021 from 1:00 pm to 6:00 pm at 776 S, Illinois Route 59, Naperville, IL. The camp was administered by Prism Health Labs.

Harish Kolasani, the co-founder of National India Hub shared his excitement over the opening of the new location. He also announced the official launch of India Hub, a one-stop destination offering assistance on a variety of important matters to people of all the ethnicities.

Prism Health Labs has gained more and more accolades and has won another feather in its cap by bringing its mass vaccination mission to the City of Naperville. Mall of India leadership offered its prime location free of cost to help Prism achieve its goal.

Congressman Bill Foster congratulated National India Hub and Prism Health Labs for the great initiative of organizing the vaccination camp. Mayor Steve Chirico praised the efforts of Dr. Mahbub Kapadia of Prism Health Labs and Mall of India owners and Omayra R Glachello IDPH Regional Health Officer for making this possible. Mayor Chirico said that he is looking forward to more and more camps like this and is very proud of the relationships and partnerships formed to make this camp possible. All the dignitaries, during their visit of the site, assured of their support and commitment to continuing these camps as more vaccinations became available. Ajay Sunkara, the Vice President of Mall of India along with his partner Vinoz Chanamolu thanked the City of Naperville for making the approval process for the vaccination camp at the Mall smooth and fast.

Dr. Benny White took great pride in being able to be present at the first vaccination camp in the great city of Naperville hoping it to be trendsetter and spearheading the upcoming camps. Dr Vemuri Murthy could not contain his happiness speaking at the vital center for the vaccination camp and appreciated the efforts of all the camp organizers for focusing their energy and sacrificing their time in order to make these initiatives successful.

Harish Kolasani extended his thanks to the Mall of India owners Vinoz Chanamolu and Ajay Sunkara for being instrumental in their support of this vaccination site by providing large space in the mall voluntarily and the mall manager Pramod Chintamaneni who helped with required arrangements. He also thanked the volunteers Laura Gaskill, Melissa Rehn, Kelly Pilleux, Sherry Podgorsky, Manisha Gore, Kim Wigge and Katie for their selfless service. The intensive care physician Dr. Imtiaz Arain and Dr Sameena thanked each and every one involved in the planning and execution of the entire camp. They also acknowledged the efforts and support of Dr Tariq Butt, President Chicago Medical Society.

Harish Kolasani also appreciated the efforts of Asian Media and its  founder in creating awareness of the mass vaccination camps and locations so that everyone looking for an appointment for the vaccine is able to avail the opportunities provided by Prism Health labs through its multiple convenient and accessible locations.  Asian Media has been relentlessly covering the mass vaccination campaign run by Prism Lab with the sole purpose of community service and will continue to do this.

The National Indo-American Association for Senior Citizens stands in solidarity with the AAPI Community.

The National Indo-American Association for Senior Citizens Inc. (NIAASC), has come out to express that they are extremely saddened by the massacre of eight innocent people, including six Asian women.

This violence comes at a time when racist attacks on Asian Americans and Pacific Islanders (AAPI)both verbal and physical are happening more and more often across the country, making these deaths even more painful.

Whilst condemning the abhorrent attack by the perpetrator, the Chairman Rajeshwar Prasad of NIAASC warned that hate crime committed against one community is a crime committed against every community and we must all join hands and prevent this from recurring.  President Gunjan Rastogi stated that hate crime has no place in civil society and both the Government administration and the private sector must make a joint effort to stamp out this systemic discrimination.

Our sympathies go to the families and friends of those who senselessly lost their lives in this racially charged attack. Unfortunately, racism still exists today, and it is a reminder to us all to stay vigilant. We hope this will be another eye-opener to the appropriate authorities to take immediate action so that such a tragedy never happens again.