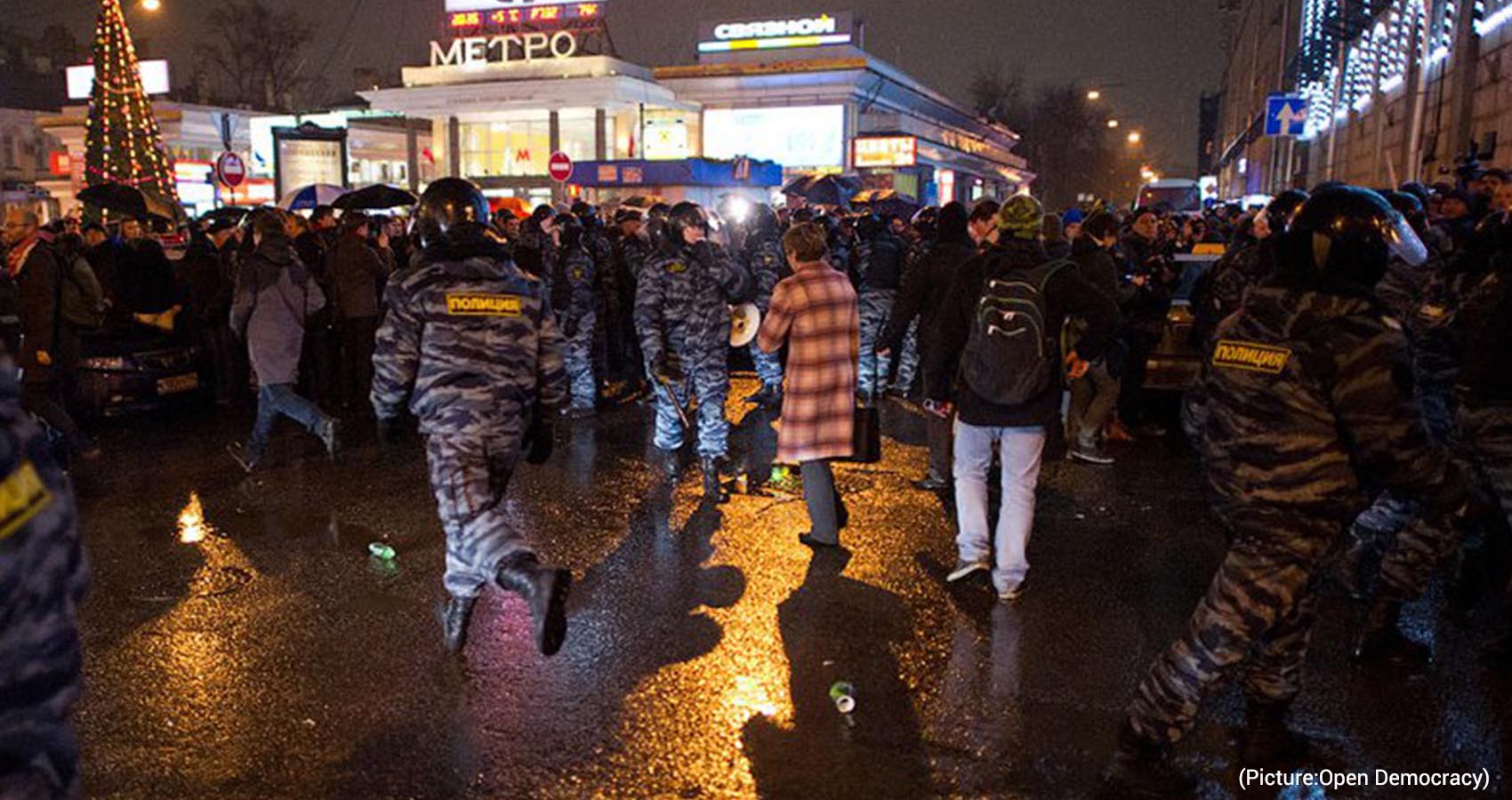 Russian President Vladimir Putin’s attack on Ukraine has been a clarifying moment. Since he came to power in 2000, various Western leaders have tried to cooperate, accommodate, or negotiate with him. But by embarking on a war of choice against a country he claims doesn’t have a right to exist, Putin has forced the international community to see him for what he is: a belligerent leader with a remarkable capacity for destruction. The result has been sweeping new measures designed to constrict and constrain him—punishing sanctions against Russia’s financial institutions, bans on Russian planes over EU airspace, and increased weapons shipments to Ukraine. Even Germany, long reluctant to confront Putin, agreed to exclude Russian banks from the SWIFT financial messaging system, reversed its long-standing prohibition on providing arms to conflict zones, and substantially increased its military spending. Russia’s invasion of Ukraine has sparked nothing less than a sea change in international perceptions of Putin and what must be done to confront him.

Such a sea change could well be underway inside Russia, too. Throughout his tenure, Putin has maintained relatively high levels of public support thanks in large part to his ability to restore economic growth and stability after the turmoil of the 1990s. While most Russians have few illusions about their leader, recognizing the corruption that benefits him and the elite around him, it remained all but unfathomable to most Russians that Putin would launch a major conventional war against their Ukrainian neighbors. For months, many Russian analysts, commentators, and citizens alike were convinced that Putin would not engage in such an act of aggression. The news of the war and the economic ramifications that followed have led Russians to see both Putin and Russia differently; Russia is not the same today as it was last week.

The prevailing wisdom holds that Putin will be able to survive any domestic backlash. That is most likely true. In personalist authoritarian regimes—where power is concentrated in the hands of an individual rather than shared by a party, military junta, or royal family—the leader is rarely driven from office by wars, even when they experience defeat. That’s both because other elites are not strong enough to hold the dictator to account and because domestic audiences have few opportunities to punish leaders for their actions. But the thing about repressive regimes like Putin’s Russia is that they often look stable right up to the point that they are not. Putin has taken a major risk in attacking Ukraine, and there is a chance—one that seems to be growing—that it could mark the beginning of his end.

There are good reasons to believe that Putin can withstand the backlash from his war. He has gone to great lengths in the last year to crack down on Russian civil society, political opposition, journalists, and the information environment. The regime’s brazen poisoning of Russian opposition leader Alexei Navalny and banning of Memorial, the country’s most important post-Soviet human rights civic institution underscore the regime’s commitment to using repression to maintain control. Russians have gotten the message. According to polling by the Levada Center in 2021, 52 percent of Russians fear mass repression, and 58 percent are scared they will be arbitrarily arrested or otherwise harmed by the authorities—the highest these indicators have been since 1994. Such an uptick in repression is common late in the tenures of longtime autocrats. The longer these authoritarians remain in power, the more they lose touch with their societies and the less they have to offer their citizens. As a result, they have few other ways to sustain their rule.

Along with repression, Putin can manipulate Russia’s information environment, shaping the way many Russians understand events in Ukraine. Already, Russia’s security actors are harassing individuals who post antiwar messages on social media and censoring facts and details about the war. The authorities also moved to shut down Echo Moskvy, an independent radio station broadcasting in Russia since 1990. Although younger generations get more information from non-state-controlled outlets, the regime remains dominant in the information space. Before Russia invaded Ukraine, polls show that large majorities of Russians supported recognizing the Russian-backed breakaway regions in eastern Ukraine as independent countries and that they blamed Ukraine and NATO for the conflict.

Together, repression and information control could help prevent Russia’s antiwar protests from catching on. So far, the regime has arrested more than 5,000 people for actively demonstrating against Russia’s invasion, which may deter others from joining. While other Russians may be willing to risk arrest if they think the demonstrations will snowball, censorship makes it difficult for potential protesters to know how many citizens are upset with the war. Most likely, the Putin regime will only further ratchet up repression to deal with a more restive Russian public. Personalist regimes are more likely to use repression in response to protests than are other autocracies, and they are especially likely to do so when engaging in expansionist territorial conflicts (as Putin has with Ukraine). Moreover, many of the Russians fed up with Putin will opt to leave Russia, as some already have, reducing the pressure mounting against the regime.

Putin has also gone to great lengths to inoculate himself against another threat: elite defection. In a highly choreographed meeting of his national security council, Russia’s president forced each member of his team to publicly pledge their support for his decision to recognize the independence of Donetsk and Luhansk, the two separatist regions in eastern Ukraine. This reduced the council members’ ability to credibly defect and claim that Putin is taking Russia in the wrong direction. Likewise, Putin convened his country’s most powerful businessmen the day after the campaign against Ukraine began to discuss the economic shocks that would follow. Putin’s goal was clear—remind them that their fates are tied to his continuation in power.

But there are also good reasons that the tides might turn. Despite the repression, protests have taken place in more than 58 cities across Russia. The early demonstrations are remarkable not just for the bravery that they reflect, but also for the potential that they hold—protests in highly repressive regimes are more likely to be successful than protests in less repressive environments. That is because when people take to the streets even when the costs of doing so are high, it sends a powerful signal to other citizens that their dissent is shared. In this way, these early antiwar protests have the potential to trigger cascading opposition. The fact that Russians view Putin’s war as being unjust and egregious makes it especially likely to prompt widespread backlash. It is moments of acute injustice that have the greatest ability to mobilize people—as when Tunisian fruit vendor Mohamed Bouazizi set himself on fire after local officials humiliated him and confiscated his wares, launching the Arab Spring in 2011.

The war also has famous and influential domestic opponents—and they are not just known dissidents. Several Russian celebrities have signed letters opposing the war. Russian tennis star Andrei Rublev wrote “no war please” on a TV camera. The Russian head of a delegation at a major UN climate conference apologized for his country’s invasion of Ukraine, and the daughter of Putin’s press secretary reportedly posted “no war” on her Instagram account. (She deleted it hours later.) There are even signs that Putin’s cozy oligarchs are getting uncomfortable. Former energy magnate Anatoly Chubais posted a picture of Boris Nemtsov, a Russian opposition leader murdered in front of the Kremlin, on his Facebook page. Russian billionaire Oleg Deripaska called for peace and negotiations. 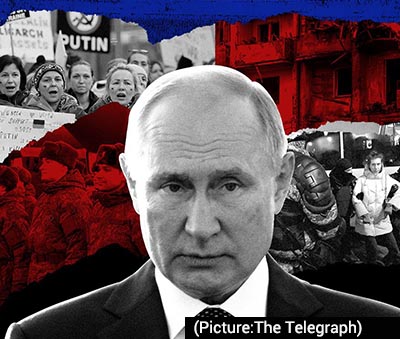 Even if Putin’s actions don’t immediately push him from power, the war in Ukraine creates long-term vulnerabilities. Punishing economic sanctions are already shredding the value of the ruble, and the economic damage is expected to intensify. Over time, this could weaken Putin domestically. Personalist dictatorships generally cut government spending when faced with sanctions, making life even harder for average citizens and increasing the odds of growing unrest. Sanctions also tend to be more effective when targeted at personalist authoritarian regimes than when aimed at other types of autocracies because personalist dictators are the most dependent on patronage to keep power. So far, Russia’s elite have never had to choose between the life they wanted and Putin. But Chubais’s and Deripaska’s comments hint that could change as the effect of the sanctions sets in, especially if they are coupled with stepped-up anticorruption efforts by the United States and Europe. If they are squeezed tight enough, Russia’s elites may come to decide that Putin can no longer guarantee their future interests and try to replace him with a leader who would withdraw from Ukraine and prompt the West to unfreeze their assets.

Finally, the conflict in Ukraine may well evolve into a drawn-out insurgency that slowly saps the patience of the Russian public. Research shows that personalist dictators are more willing than other authoritarians to tolerate military disputes with high casualties, but that doesn’t mean their citizens are. In Libya, for example, former leader Muammar al-Qaddafi engaged in heavy-handed repression to maintain control of the country as the costs of his wars increased. But eventually, when faced with dire economic conditions, ordinary citizens violently overthrew his government. In the Soviet Union, a lengthy and expensive invasion of Afghanistan helped drain faith in the Communist Party’s regime. It is not inconceivable that Putin’s grip on Russia will slip if Ukraine becomes a morass.

Predicting the downfall of an authoritarian leader is a fool’s errand. Weak and embattled autocrats can limp along far longer than analysts expect. Former Zimbabwe President Robert Mugabe survived hyperinflation and electoral defeat, staying in power until just two years before his death. Venezuelan President Nicolás Maduro remains in office, even though Venezuela’s economy has utterly collapsed. Similarly, leaders that appear strong can be suddenly ousted, as happened to former Egyptian President Hosni Mubarak in 2011 and Tunisian President Zine el-Abidine Ben Ali that same year.

But analysts do know that personalist leaders such as Putin are more likely to make foreign policy mistakes than are other autocrats. They surround themselves with yes men who only tell them what they want to hear and withhold bad news, making it difficult for these dictators to make well-informed decisions. Whether or not Putin’s war of choice becomes the mistake that unseats him from power is an open question. But Russia is experiencing rising dissatisfaction from the public, fissures among its elite, and broad-based international punishment. Putin’s downfall may not come tomorrow or the day after, but his grip on power is certainly more tenuous than it was before he invaded Ukraine.