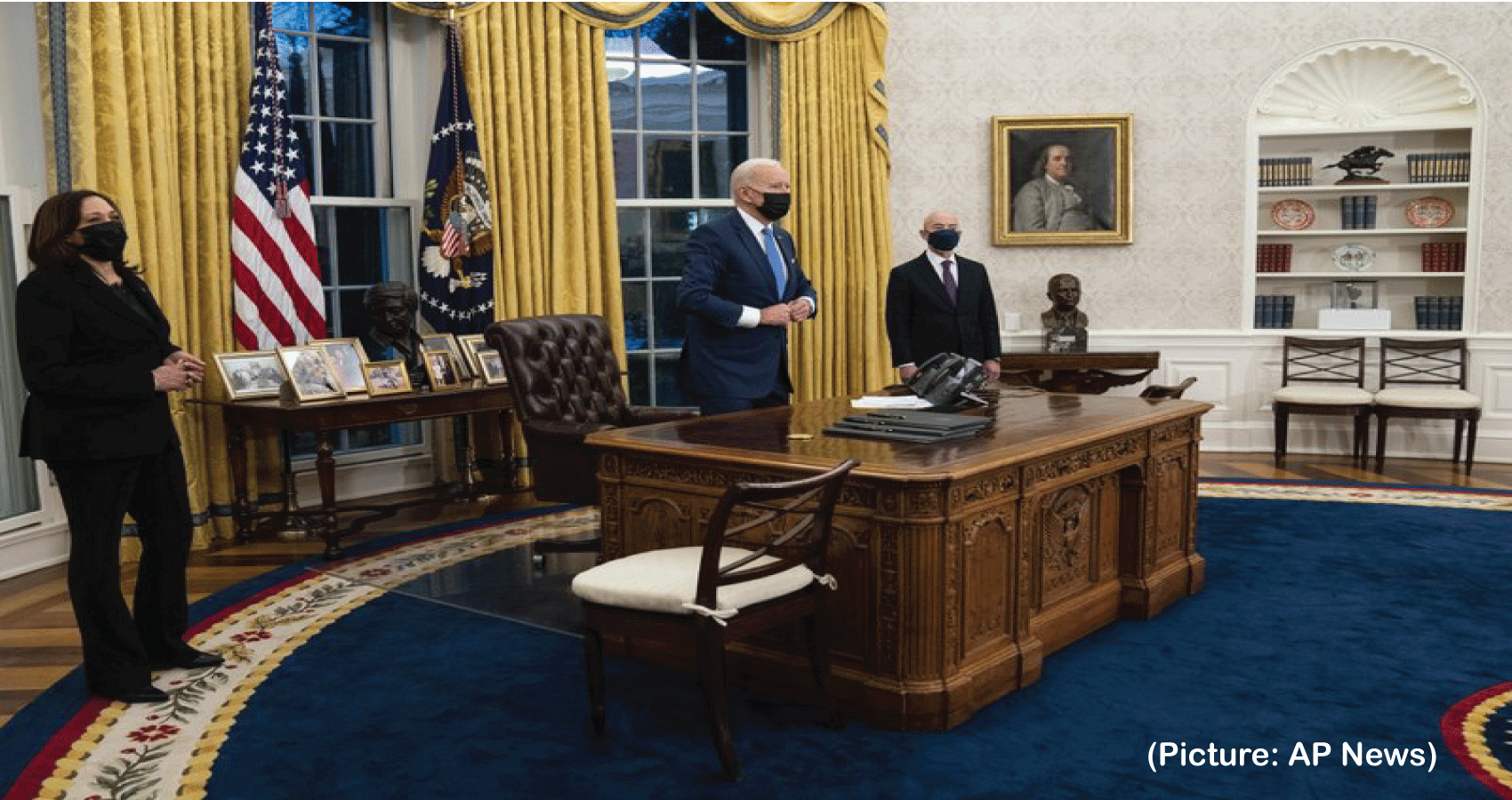 Two weeks into a new administration, a majority of Americans say they have at least some confidence in President Joe Biden and his ability to manage the myriad crises facing the nation, including the raging coronavirus pandemic.

Overall, 61% approve of Biden’s handling of his job in his first days in office, according to a new poll from The Associated Press-NORC Center for Public Affairs Research. Though the bulk of Biden’s support is from fellow Democrats, about a quarter of Republicans say they approve of his early days in office.

Even at a moment of deep national divisions, those numbers suggest Biden, as with most of his recent predecessors, may enjoy something of a honeymoon period. Nearly all modern presidents have had approval ratings averaging 55% or higher over their first three months in office, according to Gallup polling. There was one exception: Donald Trump, whose approval rating never surpassed 50% in Gallup polls, even at the start of his presidency.

Biden’s standing with the public will quickly face significant tests. He inherited from Trump a pandemic spiraling out of control, a sluggish rollout of crucial vaccines, deep economic uncertainty and the jarring fallout of the Jan. 6 riot on Capitol Hill. It’s a historic confluence of crises that historians have compared to what faced Abraham Lincoln on the eve of the Civil War or Franklin Delano Roosevelt in the depths of the Great Depression.

Biden’s advisers know that the new president will be quickly judged by Americans on his handling of the pandemic, which has killed more than 450,000 people in the U.S. He’s urgently pressing Congress to pass a $1.9 trillion relief package that would include funds for vaccine distribution, school reopening and state and local governments buckling under the strain of the pandemic.

“We have to go big, not small,” Biden told House Democrats on Tuesday. He’s signaled that he’s open to trimming his $1.9 trillion proposal but not as far as some Republicans are hoping. A group of GOP senators has put forward their own $618 billion package.

About three-quarters of Americans say they have at least some confidence in Biden’s ability to handle the pandemic, while about a quarter have hardly any. Still, that confidence is measured — no more than about 4 in 10 say they have “a great deal” of trust in Biden to handle any issue asked about in the poll.

From the start, Biden has sought to differentiate his approach to the pandemic, and governing as a whole, from Trump’s. He’s empowered public health officials and other experts, putting them at the forefront of briefings on COVID-19 and other policy issues, unlike the former president, who often clashed with members of his coronavirus task force.

According to the AP-NORC survey, about 8 in 10 have at least some trust in Biden to incorporate the advice of experts and advisers into his decision-making. Roughly three-quarters have a great deal or some confidence in Biden’s ability to effectively manage the White House.

A December AP-NORC poll showed that Americans identified the pandemic and the economy as their top priorities for the U.S. government in 2021. The two issues are directly linked, with the pandemic battering businesses across the country and creating economic uncertainty as states and cities grapple with public health restrictions.

About two-thirds of Americans say they have at least some confidence in Biden’s ability to handle the economy and jobs. That’s similar to his ratings from the public on his approach to health care, race relations and climate change.

In his first two weeks in office, Biden has signed a blizzard of executive orders on those policy priorities and others, largely aimed at undoing actions of the Trump administration. Among them: rejoining the Paris climate accord, pausing new oil and gas leases on public lands and reversing a Trump-era travel ban on people from several majority-Muslim countries.

But executive actions are inherently limited in scope, and Biden needs Congress to step in to help him pass the more sweeping aspects of his agenda. He has the narrowest of Democratic majorities in both the House and the Senate, meaning he’ll either need some Republican support for his agenda or have to push through rule changes that would allow legislation to pass with fewer votes.

Just 20% of Americans say they have a great deal of confidence in Biden’s ability to work with Republicans in Congress, though another 45% say they are somewhat confident.

Tom Tierney, 65, of Richland, Washington, voted for Biden in November and said he’s skeptical about Republicans’ willingness to work with the new president. He urged Biden to not waste time if GOP leaders are holding up his agenda.

“I think that Biden’s going to have to eventually play hardball and say, you know what, you guys don’t really want to compromise,” said Tierney, who described himself as a moderate independent.

Biden was already facing enormous headwinds after winning the election, but the crises facing the country escalated after the Jan. 6 riot at the Capitol. The insurrection revealed the extent to which Trump’s false attacks on the integrity of the election had resonated with his supporters and the threat that posed to the nation’s democratic institutions.

In his inaugural address, Biden noted both the durability and the fragility of American democracy, a particularly pointed message given that he was speaking from the same Capitol steps that had been overrun by the pro-Trump mob just two weeks earlier.

A majority of Americans — 70% — say they think Biden respects the country’s democratic institutions. Miguel Castillo, 39, of Columbus, Georgia, voted for Trump in 2020 and hasn’t been impressed with Biden’s opening moves. Yet he said he’s hopeful for the sake of the country that the new president succeeds.

“Whatever he does, it affects all of us as Americans,” Castillo said. “I hope that his presidency is a good presidency. I don’t wish him to fail. I honestly do not. ”

The AP-NORC poll of 1,055 adults was conducted Jan. 28-Feb. 1 using a sample drawn from NORC’s probability-based AmeriSpeak Panel, which is designed to be representative of the U.S. population. The margin of sampling error for all respondents is plus or minus 3.8 percentage points.