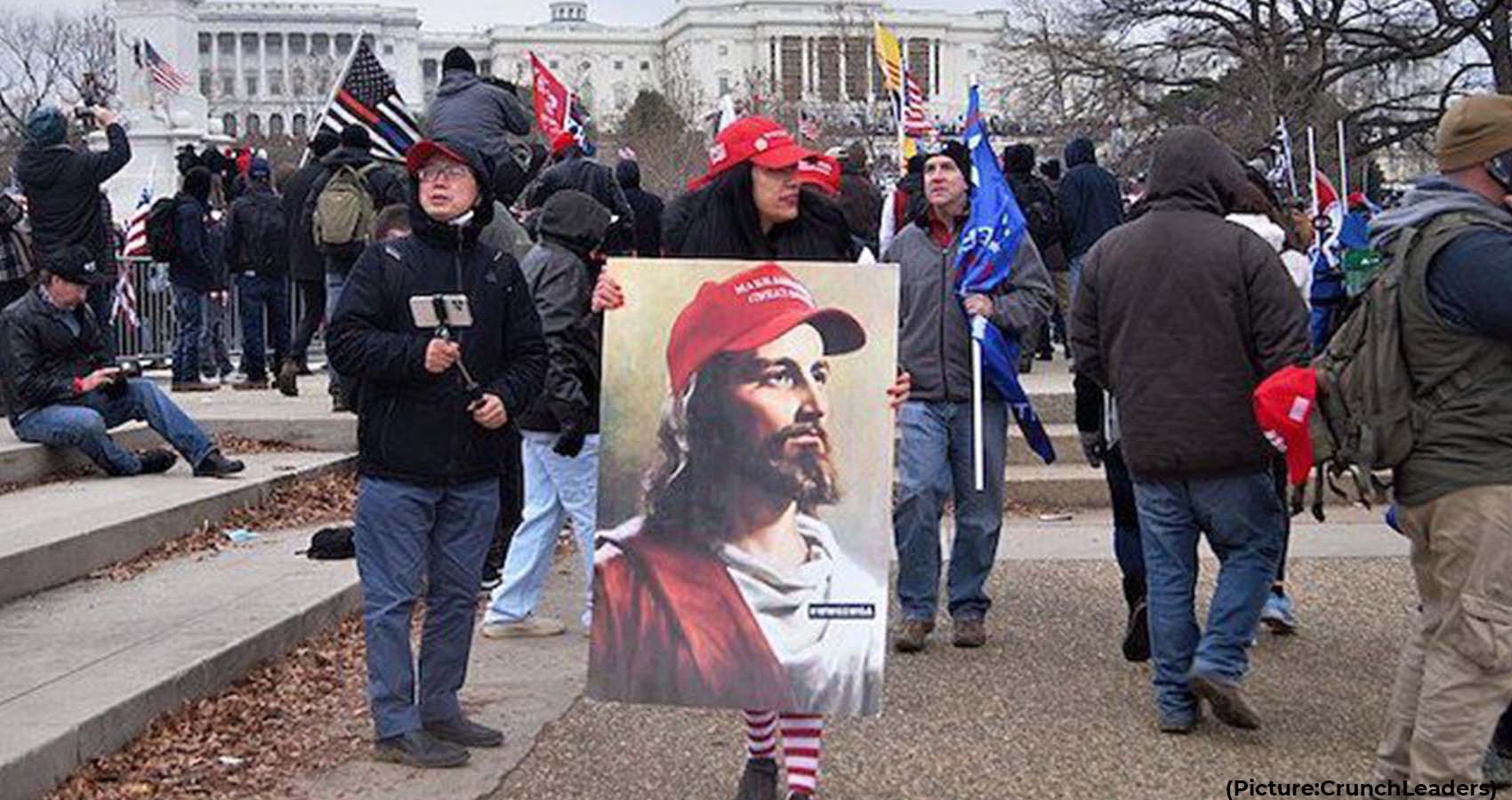 On June 1, 2020, then-President Donald Trump marched across Lafayette Square outside the White House, trailed by an anxious-looking team of advisers and military aides. The group shuffled past detritus left by racial justice protesters after a frantic mass expulsion executed by police minutes prior with clubs, pepper balls and tear gas.

The dignitaries stopped in front of St. John’s Church, where presidents, including Trump, have traditionally attended services on their Inauguration Day. St. John’s, which had suffered a minor fire the day before, was closed. But Trump took up a position in front of its sign and turned toward the cameras, a Bible held aloft.

“We have the greatest country in the world,” Trump said. In the distance, sirens wailed.

Washington’s Episcopal bishop, whose diocese includes St. John’s, condemned Trump’s stunt, saying it left her “horrified.” But White House chief of staff Mark Meadows declared he was “never prouder” of the president than in that moment, calling it a rejection of “the degradation of our heritage or the burning of churches.” Trump’s evangelical Christian advisers were similarly effusive, lauding the photo op as “important” and “absolutely correct.” 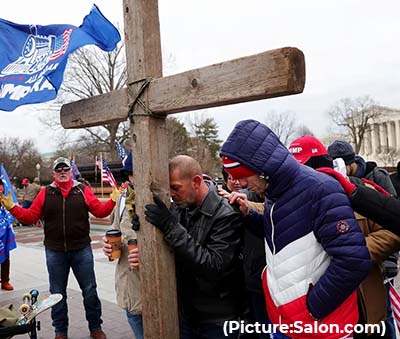 In retrospect, the “symbolic” message of Trump’s Bible photo op, as he termed it, operates as a bookend to the Christian nationalism on display at the attack on the U.S. Capitol seven months later. It communicated, however histrionically, that the president was leading an existential fight against politically liberal foes calling for a racial reckoning, but at the center of which was an attack on Christian faith. From that moment on, Christian nationalism — in the broadest sense, a belief that Christianity is integral to America as a nation and should remain as such — provided a theological framework for the effort to deny Democrats the White House.

As Trump’s poll numbers dipped the same month as the photo op, his campaign redoubled efforts to stir up support among his conservative Christian supporters. Then-Vice President Mike Pence embarked on a “Faith in America” tour, while Trump conducted interviews with conservative Christian outlets and held rallies at white evangelical churches.

In this Jan. 6, 2021, file photo, a man holds a Bible as Trump supporters gather outside the Capitol in Washington. The Christian imagery and rhetoric on view during the Capitol insurrection are sparking renewed debate about the societal effects of melding Christian faith with an exclusionary breed of nationalism. (AP Photo/John Minchillo)

Referring to “American patriots,” Trump told rallygoers at Dream City Church in Phoenix: “We don’t back down from left-wing bullies. And the only authority we worship is our God.”

In August at the Republican National Convention, Trump described early American heroes as people who “knew that our country is blessed by God and has a special purpose in this world.” Pence, in his speech, adapted Christian Scripture by swapping out references to Jesus with patriotic platitudes.

Despite then-candidate Joe Biden’s public discussion of his Catholic faith, and the overt religiosity of the Democratic National Convention, Donald Trump Jr. told the GOP crowd that “People of faith are under attack” in the United States, pointing to restrictions on large gatherings due to the COVID-19 pandemic.

Yet it was Trump’s religious supporters who did the attacking the final night of the RNC. After leaving the convention’s fireworks-filled celebration at the White House, conservative Christian commentator and Trump loyalist Eric Metaxas was filmed punching an anti-Trump protester off his bike and fleeing into the night, only admitting to the assault days later in an email to Religion Unplugged.

After Trump lost the election in November, a report from the Baptist Joint Committee for Religious Liberty and the Freedom From Religion Foundation concluded that Christian nationalism, also referred to as white Christian nationalism, was used to “bolster, justify and intensify the January 6 attack on the Capitol,” according to BJC’s Amanda Tyler.

In this Jan. 6, 2021, file photo, Pastor Paula White leads a prayer in Washington, at a rally in support of then-President Donald Trump called the “Save America Rally.” (AP Photo/Jacquelyn Martin, File)

In the days after the vote, Florida pastor Paula White, leader of the White House faith office, preached a sermon from her home church in which she called on “angels” from Africa and other nations to assist in overturning the election results. The next night, insisting she was only addressing “spiritual” matters, White vacillated between the ethereal and the electoral: She entreated the Almighty to “keep the feet of POTUS in his purpose and in his position” and decry any “fraud” or “demonic agenda” that “has been released over this election.”

The religious rhetoric ramped up with the effort to “Stop the Steal.” Thousands of Trump’s supporters descended on Washington in mid-November for the “Million MAGA March,” where Ed Martin, a conservative politician and an executive at the Eagle Forum, flanked by signs reading “Jesus matters,” argued that the United States was “founded on Judeo-Christian values” and should not be led by “CNN … or fake news.” Martin called on God to “bless us in our work” and asked God to “strengthen us in our fight” to defend Trump because the “powers of darkness are descending.”

Around the same time, activists began planning a series of  “Jericho Marches” across the country, invoking the biblical story of Israelites besieging the city of Jericho. In Pennsylvania, demonstrators marched around the state Capitol waving Trump flags and blowing on Jewish ritual horns called shofars. Verses of the hymn “How Great Is Our God” mixed with chants about electoral fraud.

The largest “Jericho March,” on Dec. 12 in Washington, was emceed by Metaxas and included Trump-circle figures such as disgraced former national security adviser Gen. Michael Flynn and current Pennsylvania gubernatorial nominee Doug Mastriano. Stewart Rhodes, the leader of the militant group Oath Keepers, who now faces sedition charges for his alleged role in the Capitol attack, called for the marchers to join him in a “bloody war” if the election results weren’t overturned.

Several groups took on a religious bent as Jan. 6 approached. Members of the Proud Boys, a right-wing group known for clashes with leftist protesters, prayed near the Washington Monument in December, comparing their “sacrifice” to Jesus’ crucifixion. “God will watch over us as we become proud,” one man shouted into a bullhorn. (The next evening, Proud Boys — after being prayed over by conspiracy theorist Alex Jones — tore “Black Lives Matter” signs from Washington-area churches, setting one on fire.)

Jericho Marchers were among the thousands who descended on Washington in January, some traveling on buses paid for by Mastriano. On Jan. 5, a group processed around the U.S. Capitol, holding signs emblazoned with Trump’s face while once again blowing shofars and singing “How Great Is Our God.” That night, Tennessee pastor Greg Locke —in addition to lifting up prayers for the Proud Boys — preached to a raucous crowd, describing America as “the last bastion of Christian freedom” and declaring that Trump would stay “for four more years in the White House.”

The next day on the National Mall and the Capitol steps, Christian nationalist iconography was unavoidable. Men and women waving flags that read “An Appeal to Heaven” or “Proud American Christian” surged past Capitol police as the officers tried to halt those entering the Capitol building. When people adorned in Oath Keepers attire stormed into the Capitol rotunda, they appealed to the Almighty for “letting us stand up for our country.”

In the Senate chamber, the invaders invoked Jesus’ name and bowed their heads as a self-described “shaman” associated with the QAnon conspiracy theory movement thanked Jesus for “allowing” them “to get rid of the communists, the globalists and the traitors within our government.”

As District of Columbia police officer Daniel Hodges, who was crushed in a door by insurrectionists that day, put it: “It was clear the terrorists perceived themselves to be Christians.”

That was certainly the case with Jenny Cudd, who was later tried and convicted for her actions at the Capitol. In a video posted to Facebook on Jan. 6, Cudd, draped in Trump-branded gear, said: “We were founded as a Christian country. And we see how far we have come from that. … We are a godly country, and we are founded on godly principles. And if we do not have our country, nothing else matters. “To me, God and country are tied — to me they’re one and the same,” said Cudd.