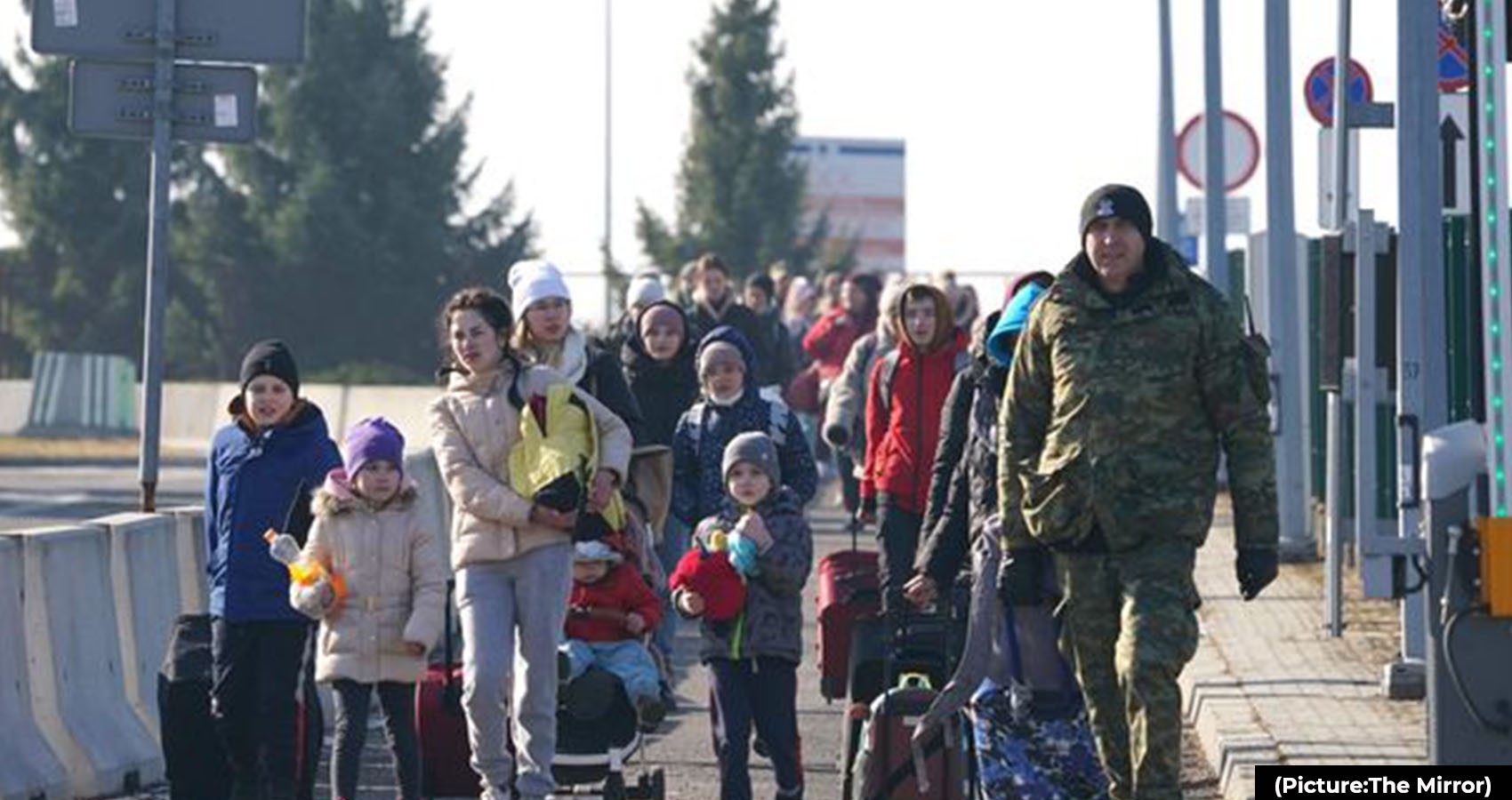 Nikita Kruschev, Russian President Vladimir Putin’s predecessor, even though not immediate, is known to have said that he accepts every single teaching of Jesus except the one in which Jesus tells his disciples that if anyone slaps on one cheek, he/she should offer the other cheek instead of retaliating, and hitting back. Kruschev’s way of going about, if anybody would slap him, would be, to hit back with such force that the head of the aggressor would fall off! That is how far Kruschev was from Jesus and His teachings.

Now, Putin seems to have gone even further than Kruschev when he started an undeclared war, and invaded Ukraine. It is an unprovoked war, and therefore, unjustified on every count. He has not been slapped by anyone on his cheek, but he is out to destroy a democratic free country. Kruschev would be lagging far behind, as an opponent of Christ, having been put to shame by Putin with this act of aggression against Ukraine, not to be justified by anyone.

With great anxiety and with a prayer in my heart I have been reading newspapers and watching news in the last few weeks, as tension had been building up between Russia on one side, and the U.S.A., NATO and Ukraine on the other side. Everybody had been wondering why Russia had deployed 1,50,000-plus troops around Ukraine, if they had no intention of annexing Ukraine, as they claimed. 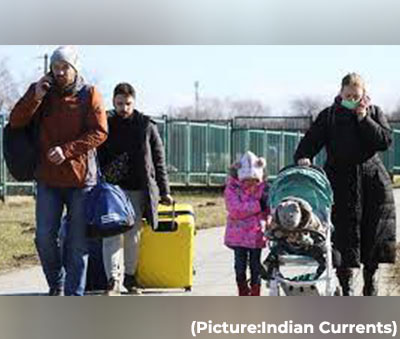 In fact, the Russians were talking about a hysteria of the West for fear of the annexation of Ukraine which, they said, was never on their mind, but only a fiction of the hysterical minds of the West. And then came the onslaught on Ukraine and the Ukrainians, turning the seeming glimmer of goodness and hope into a lie. And what a lie it was! The reports are that, as I am writing this, over 2 million of Ukrainian refugees have sought refuge in neighbouring countries like Poland, Moldova, Lithuania, Slovakia, Hungary, Romania. Besides, millions of people have been displaced within the country, and they are going about helplessly trying to find a safe place for themselves.

My heart weeps when I see those poor people leaving their homes and heading towards unknown destinations. It is particularly painful and heart-wrenching to see little children walking or being carried by their mothers. In most cases the mothers are left alone to fend for themselves in this task, because the Ukrainian authorities have ordered the men-folk to stay back and defend their country from the Russian aggressor. And they are heroically doing this for the love of their country.

I am asking myself if the aggressors and their bosses do not know what kind of suffering they are giving these poor people. So many are getting killed, so many are getting injured. Do the aggressors not have hearts of flesh? Are their hearts of stone? Or do they not have hearts at all? Not even the sight of little children dragging their suitcases, bigger than themselves, seems to melt the heart of Putin and his men. Expecting Putin to know how Jesus loved little children, and always wanted them to be brought to him (Mt. 19:14), is perhaps too much?! But then Putin is a Christian, belonging to the Orthodox Church, and so he should have known this. I am wondering why the leaders of his Orthodox Church are not opening their mouths to teach Putin what Jesus would have liked to teach him.

Unlike Pope Francis, who has condemned this war without mincing words, we are yet to hear the voice of the Orthodox Church!

I wonder if President Putin has seen the picture of a mother carrying a little child, which has gone viral these days. It is the picture of Putin’s mother carrying Putin in her arms. The story is that a soldier came home from the front-lines for a brief break, during the World War II. He reached his house to see people loading dead bodies onto a truck. Sticking out of the pile of bodies, the soldier saw the leg of a lady with a pair of shoes, which he recognised as his wife’s shoes. He had to plead and fight with the men who were loading the dead bodies onto the truck, so he could hug the body of his wife. The reluctant men relented and let the man pull the body of his wife out from the pile of dead bodies. To his and everybody’s surprise, he realized that the woman was still alive and breathing. He carried her home, and nursed her to, what could be called, a new life.

A few years later, a son was born to the couple. And that was Vladimir Putin! How I wish I could go and put this picture in front of Putin’s eyes to remind him that it was God’s mercy that had kept his mother alive, and given him the gift of life. I would also like to remind him that he had to show the same mercy towards one and all, rather than be a cause of sorrow and suffering for others.

It is difficult for me to understand how the man’s heart does not melt to see those women and children fleeing their homes, knowing that, in all probability, they will not live to see their beloved ones back at home. Not everybody can have the same good fortune that Putin had. How can anyone be so untouched by the heart-wrenching scenes we see on TV unless one has no heart at all?

We are reminded of similar scenes we saw some time back here in our own country, when our roads were filled with thousands of people, migrant workers, returning to their homes, having lost their jobs, sometimes mothers delivering babies along the roads, and many people breathing their last on the roads. At that time, too, we had felt that those who were responsible to inflict these sufferings on the poor people had no hearts. Unfortunately and sadly, we are made aware that there are such people in this world even today.

I started by saying that both Kruschev as well as Putin are far away from Jesus and His teachings. Those who act and behave like this, with no feelings of love and mercy in their hearts, like many of our own leaders, are far removed from the teachings of Jesus.

The Gospels present Jesus as a loving and merciful teacher, who always thought of others, rather than of himself. Why would he, otherwise, even though he was God, “not count equality with God a thing to be grasped, but rather empty himself, taking the form of a servant?” (Philippians 2:6) And, therefore, his teaching was always “Rejoice with those who rejoice, and weep with those who weep” (Rom. 12:15). I can well imagine Jesus weeping with all those who are suffering now because of this senseless and unjust war inflicted upon the poor people of Ukraine. In fact, his infinite love and mercy, even in this situation, says to the Ukrainians: “Bless those who persecute you; bless and do not curse them” (Rom. 12:14).

A glimmer of hope

In the darkness and hatred of this war, there is a glimmer of light and hope because there are people who see evil in it and condemn it. One such powerful and shining beacon is Pope Francis who had been raising his voice against the dangers of this war. And once it had unfortunately started, he went to the Russian Embassy in Rome to plead for peace and negotiations across the table. Here is a man, who is a true disciple of Jesus, who is prepared to go to any extent, to live the message of Jesus and to propagate it. And he is aware that all over the world people are hungering for love and peace. Therefore, he has taken it upon himself to promote love, peace, mercy, forgiveness and reconciliation. He has knocked at the doors of embassies and fallen at the feet of leaders pleading for peace.

Pope Francis shows and teaches that one has to be prepared to turn the other cheek, and live the message of Jesus in its entirety. He has often said that wars never solve problems, but only bring about misery upon the people who are involved in them. The Pope always harps upon the theme of God’s mercy to such an extent that it led a prominent Italian clergy-man to say that he seems to be exaggerating on the mercy of God. But I countered him by asking him how he could talk about exaggerating on God’s mercy, when we know that God’s mercy is infinite. How does one exaggerate on something which is infinite?

What Putin and his stooges are very much in need of, at this juncture, is God’s Mercy. They must be prepared to humble themselves, and cease hostilities acknowledging that these are purely based on their lies and on their selfishness and pride. This may seem difficult and even impossible now. But we know that for God nothing is impossible. And we know that people all over the world are praying for peace. With the prayers of millions of people God can change the heart of Putin and his advisers. As it is rightly said, a Church kneeling in prayer is more powerful than an army on its feet.

There are many who consider this war as an evil, and condemn it. We know that there are thousands of people all over the world, and even within Russia, who are protesting against this unjust war. This gives us another glimmer of hope. The hardened heart of dictator Putin has clamped down upon them, and locked them up in prison. However, as our own Father Stan Swamy, of happy memory, said, when he was put behind bars, “a caged bird can still sing”. So, they will continue to protest against Putin and his actions. May they and millions of people all over the world continue to condemn the dictator of Russia. And may their protesting voices continue to resound and eventually touch and change the hardened heart of Putin. Let us remember that The Lord is the one who said to His people: “A new heart I will give you, and a new spirit I will put within you; and I will take out of your flesh the heart of stone and give you a heart of flesh” (Ezekiel 36:26).

Let us remember that the Lord came to the rescue of Israelites when the powerful Egyptians pursued them. The book of Exodus tells us that “in the morning watch, the Lord in the pillar of fire and of cloud looked upon the host of the Egyptians, and discomfited the host of the Egyptians, clogging their chariot-wheels so that they drove heavily. And the Egyptians said: “let us flee from before Israel; for the Lord fights for them against the Egyptians” (Exodus 14: 23-25). We also have the case of David and Goliath, when a shepherd’s sling proved to be mightier than a sword (1 Sam. 17:48). God is almighty, and He is always in command.