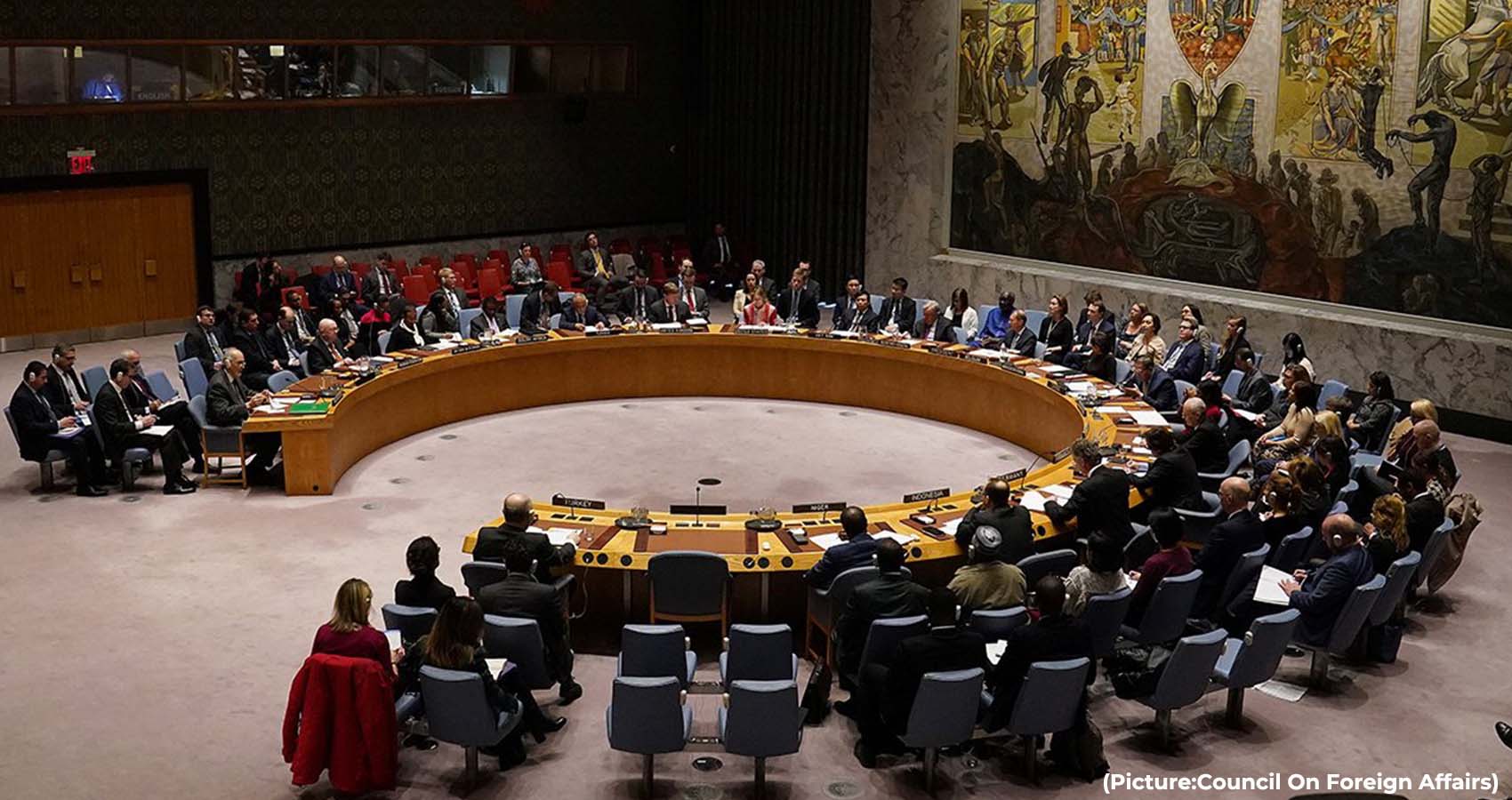 The other day a friend asked me “Can Russia be expelled from the General Assembly by a two-thirds majority?”  Almost impossible to do that, I responded.

Two of the articles of the Charter of the United Nations relate to the issue of possible exclusion of Russia from the United Nations. Article 5 talks about suspension and Article 6 talks about expulsion. According to those articles, the action needs be taken by the General Assembly with two-thirds majority, upon the recommendation of the Security Council. That recommendation of the Council cannot be made as it is subject to veto by the Russian Federation as one of the five Permanent Members.

The obvious follow-up question was “Has any country been ever expelled or suspended from the General Assembly?”  The U.N. General Assembly (UNGA) has effectively excluded a state on three occasions: Cambodia in 1997, Yugoslavia in 1992 and South Africa in 1974. 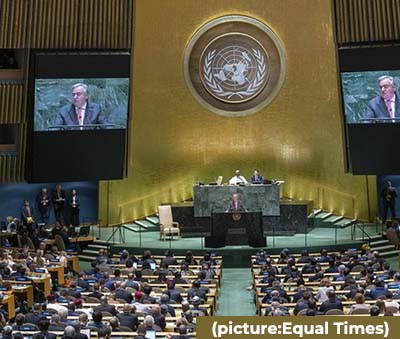 Some countries tried to expel South Africa, which was one of the 51 founding members of the United Nations in 1945, because of its policy of apartheid, but the three permanent members of the Security Council – France, UK, and US – used their veto power to block that move.

Although remaining a member of the UN, South Africa was not represented at subsequent sessions of the General Assembly. Following South Africa’s successful democratic elections of May 1994, after 20 years of refusing to accept the credentials of the South African delegation, the General Assembly unanimously welcomed South Africa back to full participation in the United Nations on 23 June 1994. It also deleted its agenda item on “the elimination of apartheid and the establishment of a united, democratic and nonracial South Africa.”

It is also important recall that in 1962, the United Nations General Assembly passed a resolution calling on all member states to impose a trade boycott against South Africa. A US Congressional legislation aimed to ban all new U.S. trade and investment in South Africa and that acted as a catalyst for similar sanctions in Europe and Japan. In 1963, the UN Security Council called for partial arms ban against South Africa, but this was not mandatory under Chapter VII of the UN Charter.

Deadlock but not dead-end – other courses of action

As mentioned earlier, the suspension or expulsion of Russia is “almost impossible” according to the UN Charter. To that, I would add that it is a deadlock but not a dead-end.

Some UN watchers are of the opinion that there are still ways to limit Russia’s presence in the U.N. beyond the Security Council as has been decided today (7 April) by the UNGA to suspend its membership in the UN Human Rights Council.

According to the General Assembly’s 1950 resolution 377A (V), widely known as ‘Uniting for Peace’, if the Security Council is unable to act because of the lack of unanimity among its five veto-wielding permanent members, the Assembly has the power to make recommendations to the wider UN membership for collective measures to maintain or restore international peace and security.

For instance. most frequently, the Security Council determines when and where a UN peace operation should be deployed, but historically, when the Council has been unable to take a decision, the General Assembly has done so. For example, in 1956, the General Assembly established the First UN Emergency Force (UNEF I) in the Middle East.

On 1 March 2022, the General Assembly, meeting in emergency session, adopted a resolution by which it deplored “the aggression by the Russian Federation against Ukraine in violation of Article 2 (4) of the Charter. Can any other process feasibly be exploited to suspend a state in such circumstances, as a way of circumventing article 5? Yes, there is a way to try that.

Though the General Assembly resolutions are non-binding, but they are considered to carry political weight as they express the will of the wider UN membership.

Some UN watchers believe that Article 5 of the Charter is not completely the end of the road on suspension. They are of the opinion that that there are two dimensions to a state’s participation in the UN: the actual membership of the state (the subject of article 5 of the Charter); and the representation of that state at the General Assembly’s sessions.

Matters of representation are considered in the context of the General Assembly’s credentials process, which is the process by which the Assembly assesses the eligibility of individual delegates to represent their states at the Assembly’s annual sessions. The process is essentially procedural in nature. It is regulated not by the UN Charter but by the Assembly’s Rules of Procedure.

While the credentials process is usually a procedural one, the credentials process effectively gives the General Assembly the power to decide which authority should be regarded as the legitimate representative of the state – at least so far as the UN is concerned. UNGA could vote to suspend Russian delegation from participating in the General Assembly, a step that does not require the Security Council.

In this context, it has been asserted that “ This move, which would strip Russia of its right to speak or vote at the UN but allow it to retain membership, previously happened in 1974, when diplomats voted to suspend South Africa for its apartheid system.”

Veto is the Chief Culprit

The headline of my opinion piece for the IPS wire of 8 March 2022 argued that “Veto is the Chief Culprit” emphasizing that “Expulsion or Suspension is Not the Remedy”. Since 1946, all five permanent members have exercised the right of veto at one time or another on a variety of issues.

I repeat my main contention in that opinion as “The chief culprit in the failure of unified global action by the UN is the continuation of the irrational practice of veto. As a matter, I have said on record that, if only one reform action could be taken, it should be the abolition of veto. Believe me, the veto power influences not only the decisions of the Security Council but also all work of the UN, including importantly the choice of the Secretary-General.”

Further, I added, “I believe the abolition of veto requires a greater priority attention in the reforms process than the enlargement of the Security Council membership with additional permanent ones. Such permanency is simply undemocratic. I believe that the veto power is not “the cornerstone of the United Nations” but in reality, its tombstone.”

Amid all these legal explanations, diplomatic exchanges, and diverse conjectures, it is unfortunate that questions have been raised about the reticence of the UN Secretary-General in getting his hands dirty and in getting more actively involved in towards ending the Russian aggression and promoting peace in Ukraine.

As much as I recall, this is first time the world public has done that about the role of the UN leadership so vocally. The UN website mentions “near daily press stakeouts by the Secretary-General” on the war in Ukraine. Is this the extent of his active role and involvement?

Well-respected UN watcher and former high UN official Kul Chandra Gautam in an opinion piece recently even exhorted the SG “not to hide behind the glasshouse at Turtle Bay and go beyond invisible subtle diplomacy to more visible shuttle diplomacy.” That is the way to go.

On 3 April, the UN website publicized a Twitter message from the SG saying: “I am deeply shocked by the images of civilians killed in Bucha, Ukraine. It is essential that an independent investigation leads to effective accountability.”

Just two pitiable sentences in Twitter (I wonder how many of the global population has a Twitter account). His operatives – the UN secretariat – misled the world by the trick headline: “UN Secretary-General António Guterres on Sunday called for an independent investigation into the killing of civilians in the Ukrainian town of Bucha, a suburb of the capital, Kyiv.”

The Ukraine President lamented on 5 April about the failure of UN Security Council saying that the Council can “dissolve yourselves altogether” if there is nothing it can do other than engage in conversation. First time, a UN Member State has spoken so frankly, so openly, so rightly in a speech before the Council which was at an impasse to stop the aggression in his country.

Unfortunately, it is widely understood that for the UN system, more so for the SG, the dominant instinct for being pro-active in any crisis situation is “the fear of failure.” That “fear” determines the process of decision-making in a big way. A global organization like UN should be smart and mature enough to understand the value of critical opinions to improve its efficacy. Unfortunately, we are not there.

Ambassador Anwarul K. Chowdhury is Former Permanent Representative of Bangladesh to the UN; President of the UN Security Council (2000 and 2001); Senior Special Adviser to UN General Assembly President (2011-2012) and Former Under-Secretary-General and High Representative of the UN.