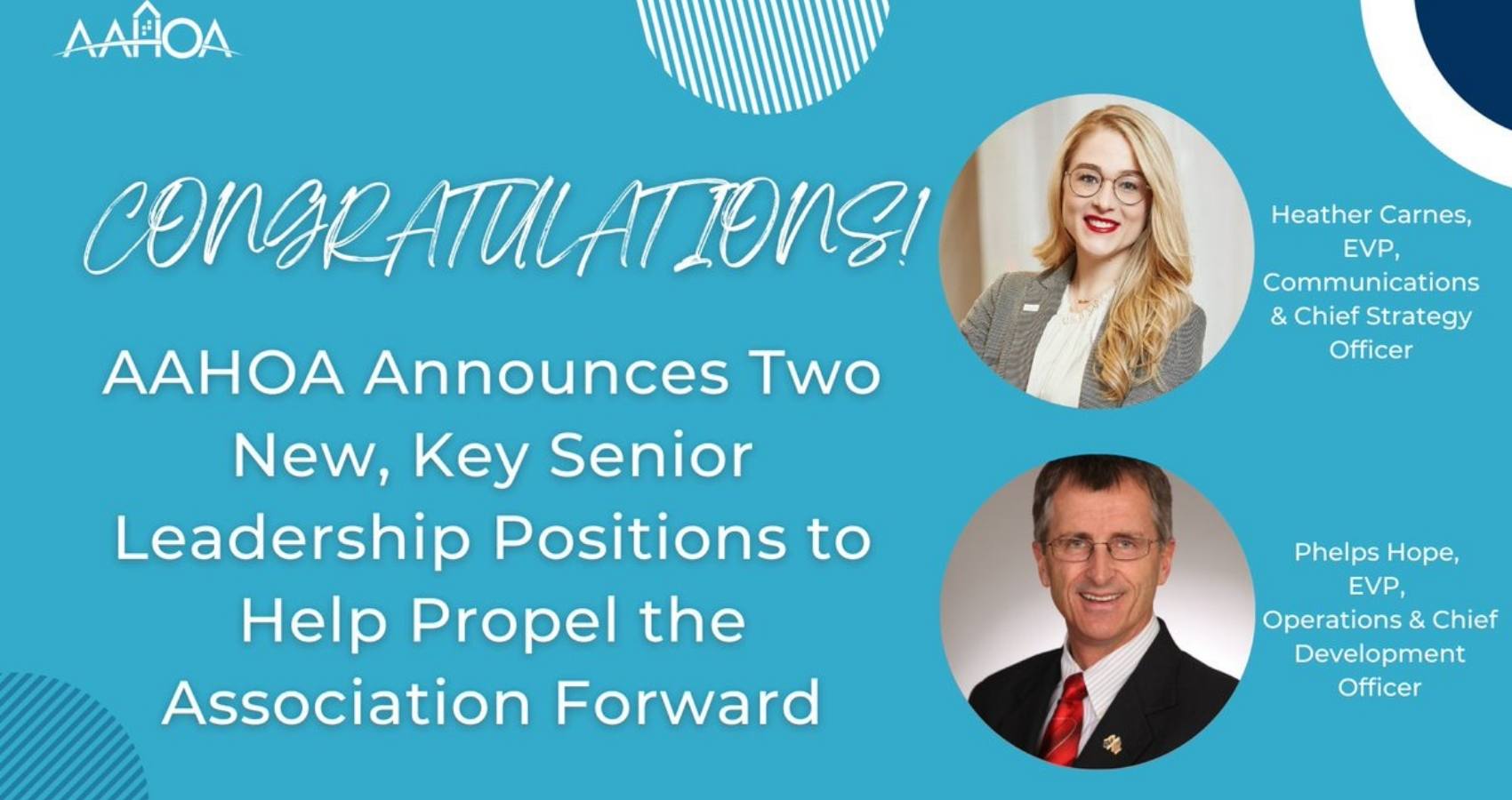 AAHOA, the nation’s largest hotel owners association, announced today the promotion of Heather Carnes to EVP, Communications, and Chief Strategy Officer, and the hiring of Phelps Hope as its new EVP, Operations, and Chief Development Officer.

Following the announcement of Laura Lee Blake being named as AAHOA President & CEO in May 2022, these advancements further underscore the association’s aggressive and ambitious plans for the future, which include identifying and securing key leaders to carry out its strategic plan.

Carnes has been a key member of the AAHOA team for three years and has dedicated nearly her entire career to the association space. During her tenure with AAHOA, she has garnered the respect of her team, AAHOA staff, volunteer leaders, and AAHOA partners, and continues to be a positive influence on the organization as a whole.

In her new role, Carnes will focus on organizational strategy, marketing and communications, organizational culture and HR, education/program development, and strategic partnerships.

“It’s an incredibly important time for AAHOA and our industry,” Carnes said, who previously served as AAHOA’s VP of Marketing and Communications. “I’m thrilled to be moving into this new role where I can have an even greater impact on the organization, our overall strategic initiatives, and working alongside Laura Lee, Phelps, and the rest of the AAHOA team to make big things happen on behalf of our nearly 20,000 hotelier members.”

In addition to the promotion of Carnes, the hiring of Hope will continue to establish AAHOA as the industry leader in hosting top-quality and widely attended conventions, regional meetings, trade shows, town halls, and related meeting events.

Since 2005, Hope served as Senior Vice President, Meetings & Expositions, for Kellen Company – one of the world’s largest providers of management and services to associations and trade organizations – where he was responsible for the management of the meetings, events, and tradeshow division, overseeing more than 300 events annually and over $30M in client account revenues.

Hope has held key positions both in Australia and the United States with Marriott, Sheraton, Hilton, and Loews Hotels, developing an in-depth understanding of hotel sales and operations.

“AAHOA is a strong organization that is known for bringing the industry together,” Hope said. “To officially join the AAHOA team provides a great opportunity for me to  bring my breadth of experience in hospitality, event production, and association management full circle.”

Hope is a Certified Meetings Professional (CMP) and is familiar with every nuance of the meetings, tradeshow, and events production process, in addition to innovative ideas to grow the business, generate revenue, and service AAHOA’s Industry Partners and Vendor Members at the highest level.

In his new role at AAHOA, Hope will primarily focus on operations and development, including leading and structuring the teams concerning conventions, events, business development, membership growth and strategy, as well as technology and associated financing.

“As AAHOA continues to grow and advance, we need a top team of executive leaders to guide and promote the team members, as well as to initiate and establish the methods and framework to ensure success,” said AAHOA President & CEO Laura Lee Blake. “I have no doubt that Phelps and Heather will be successful in helping AAHOA reach new heights as they embrace their new roles and responsibilities.  This is just the beginning as we continue making plans for increased successes and achievements for our future.”

Blake will continue to directly oversee AAHOA’s legal, governance, government affairs, and franchise relations departments with the support of Hope and Carnes.

“It bears repeating that this is a new day and a new start for AAHOA,” Blake said. With Carnes and Hope taking their places as EVPs for AAHOA, their leadership skills will help AAHOA build a strong foundation, and I am delighted they will be assisting us in continuing to transform the vision of AAHOA into reality.”

AAHOA is the largest hotel owners association in the nation, with Member-owned properties representing a significant part of the U.S. economy. AAHOA’s 20,000 members own 60% of the hotels in the United States and are responsible for 1.7% of the nation’s GDP. More than one million employees work at AAHOA member-owned hotels, earning $47 billion annually, and member-owned hotels support 4.2 million U.S. jobs across all sectors of the hospitality industry. AAHOA’s mission is to advance and protect the business interests of hotel owners through advocacy, industry leadership, professional development, member benefits, and community engagement.